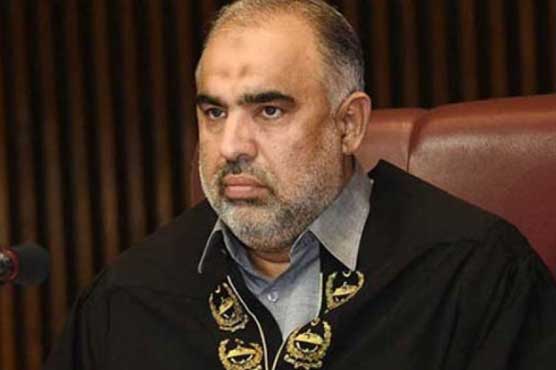 The National Assembly speaker took to the twitter to make the announcement saying, “I have just been tested COVID 19 positive and I have quarantined myself in house.”

He urged the nation to take precautions and sought their prayers.

Meanhile, Meanwhile, Asad Qaiser said that he had symptoms of fever for the last two or three days but now he is feeling well.

The NA speaker went on to say that his son and daughter have also been tested positive for the virus.

On Monday, Sindh province Governor Imran Ismail had been tested positive for the deadly coronavirus. He is currently in self-isolation.

The governor said in a tweet night, “I have just been tested COVID-19 positive…I believe this is nothing against what we are prepared for. May Allah give us strength to fight this pandemic inshallah.”

Prime Minister Khan and several top leaders of his party expressed good wishes for the governor.

So far 15,289 people have been infected with coronavirus in Pakistan. Of these, 335 died. Besides, 3,425 people have recovered.

Meanwhile, Pakistan on Thursday reported 12 more deaths from novel coronavirus as number of cases across the country reached 16,117 and 358 persons lost their lives.

Punjab is the worst-hit province by the coronavirus pandemic where 6,061 patients have been tested positive. Chief Minister Sardar Usman Buzdar said the province is now going to start smart sampling.

The CM took to Twitter and wrote, “Punjab is going to start smart sampling and a committee has been formed in this regard which will give its opinion to devise future strategies based on the test results.