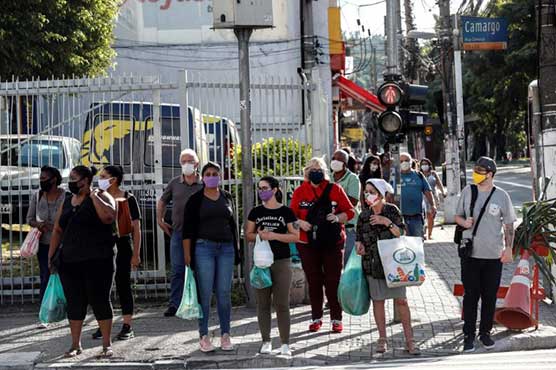 Far-right President Jair Bolsonaro’s government had stopped publishing the total number of deaths from the new coronavirus Friday, saying it was adopting a new methodology and would only report the number of deaths recorded in the past 24 hours in its daily bulletin.

That drew accusations of foul play from a long list of high-profile critics, as well as a ruling from Supreme Court Justice Alexandre de Moraes on Monday that the government must return to the old format.

The health ministry did so Tuesday, indicating the death toll had risen by 1,272, to a total of 38,406 people killed by the virus — the third-highest toll in the world, after the United States and Britain.

The ministry said the total number of confirmed infections had risen to 739,503, the second-highest caseload in the world, after the US.

Experts say under-testing means the real numbers in the country of 212 million people are probably much higher.

The health ministry did not immediately respond to questions from AFP on why it returned to the old format and its plans for the future.

Bolsonaro, who famously compared the virus to a “little flu,” has railed against the consensus response to the pandemic, saying stay-at-home measures are needlessly wrecking the economy.

“The WHO lacks independence, transparency and coherence. The foreign ministry is following its role with great concern,” Araujo said.

Bolsonaro’s threat to quit the WHO followed in the footsteps of President Donald Trump, whom he admires, and who withdrew the United States from the organization last month.

Trump accused the WHO of bias in favor of China, with whom his administration has clashed over the origin and handling of the pandemic.

US records more than 800 virus deaths in 24 hours: Johns Hopkins

Punjab likely to have surplus budget