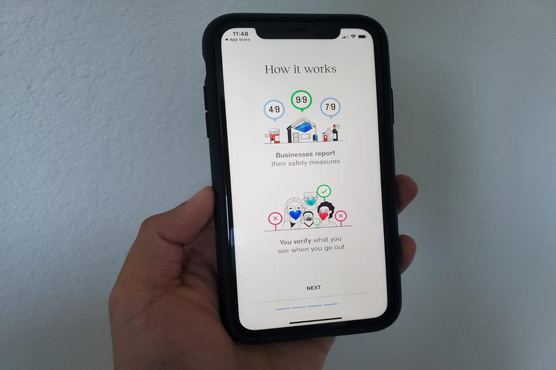 OAKLAND (Reuters) – Singapore kicked off a global rush to develop contact tracing apps for the novel coronavirus when the city-state launched an apparently new system in March.

But the project actually drew inspiration from a 2014 U.S. high school project that won an international prize but found no backers – until now.

It all started when Rohan Suri created an app at Thomas Jefferson High School in Alexandria, Virginia, to tell his mom to leave home for the bus stop when he was seven minutes away. As the Ebola epidemic ravaged western Africa at the time, Suri and schoolmate Claire Scoggins connected the dots between tracking apps and contact tracers who ask patients whom they may have spread viruses to.

“I got really interested in basically automating a lot of these contact tracing efforts,” Suri said, noting a staff shortage in remote parts of Africa during the Ebola epidemic.

When Suri and Scoggins developed a prototype called kTrace, they appealed to medical aid organizations and the U.S. government to bring it to the frontlines. But they found no takers, even after winning third place for systems software at the 2015 International Science and Engineering Fair.

The app languished until Suri, now a 21-year-old junior at Stanford University, got an email on Jan. 24 from Jason Bay, a Stanford alum and senior director at Singapore’s Government Technology Agency (GovTech).

“My mom had texted me saying, ‘You’ve got to look at this virus in Wuhan and do something about it,’” Suri said, referring to the city in China where the coronavirus outbreak began. “I didn’t take it seriously, though, and week later the Singapore government is reaching out.”

Bay’s team had been looking for technology to help curb the coronavirus and came across kTrace online. Suri spent February and March volunteering on GovTech’s TraceTogether app alongside fellow Stanford students Nikhil Cheerla and Daniel Lee.

They said they gave Singapore a roadmap by sharing kTrace’s code and providing advice in virtual meetings on stronger privacy protections. They also collected 13 phones to help test Bluetooth technology.

Singapore was “just looking around for any way to speed up the development process and we fit in,” Cheerla said.

The agency said it contacted Suri “to understand his experiences and considerations in designing kTrace for Android.” But Suri “did not commit code to TraceTogether, nor did (GovTech) use kTrace in the development of TraceTogether,” it added.