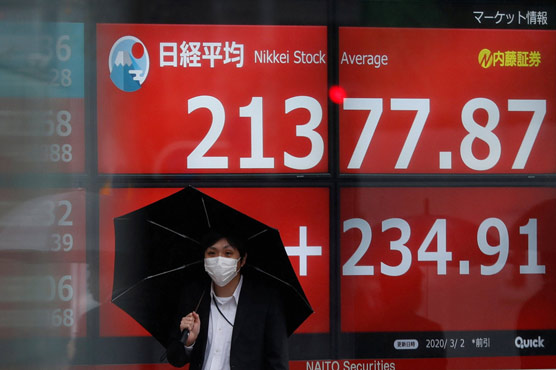 Asia turned in a subdued performance, with Tokyo gaining ground and Hong Kong flatlining, while Shanghai went into reverse.

Europe jumped out of the blocks at the open, but swiftly fell back into the red as caution prevailed before the conclusion of the Fed’s latest monetary policy gathering.

“Today will see the (Federal Reserve) meeting later this evening which could well be pivotal in deciding whether markets continue to rally,” said Scope Markets analyst James Hughes.

“The Fed has thrown an unprecedented amount of stimulus at the US economy over the last three months, and what Chairman Jerome Powell says will impact the direction of global markets.”

In recent days and weeks, global markets have fizzed higher on the back of economic recovery hopes as coronavirus restrictions are eased around the world.

However, the OECD on Wednesday warned that the world economy would shrink by at least six percent this year, with an unprecedented loss of income and “extraordinary uncertainty” caused by measures to contain the deadly coronavirus outbreak.

In the case of a second wave of COVID-19 later in the year, economic output could shrink by as much as 7.6 percent, according to the OECD which added that the recovery will be “slow and uncertain”.

Among the latest moves, Cyprus welcomed its first tourist flights in almost three months, while France announced the Eiffel Tower would re-open on June 25.

The decision will be closely watched, though most observers do not expect it to further ease monetary policy, having pledged vast sums of cash as a backstop to financial markets.

“The Fed orchestrated this market recovery, and (is) now set to offer its latest thoughts, estimates and, hopefully for market sentiment, an actionable go-forward plan,” said AxiCorp’s Stephen Innes.

The US rally stuttered Tuesday with the Dow and S&P 500 dropping as observers begin to worry that the surge since March’s troughs across markets may have gone too far.