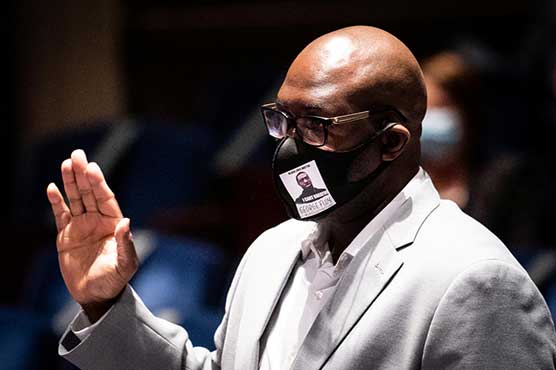 WASHINGTON (AFP) – The brother of George Floyd, whose killing by police sparked worldwide protests against racism, made an emotional plea on Wednesday to the US Congress to “stop the pain” and pass reforms that make officers accountable for brutality.

One day after burying his brother in Houston, Philonise Floyd appeared in person before a House hearing, where he described the anguish of watching a viral video of George’s death and demanded lawmakers act to fix law enforcement problems including systemic racism.

“I’m here to ask you to make it stop. Stop the pain,” the younger Floyd said.

“I can’t tell you the kind of pain you feel when you watch… your big brother, who you looked up to your whole entire life, die — die begging for his mom,” he said.

“He didn’t deserve to die over $20,” he said, referring to his brother’s alleged effort to use a counterfeit bill before his arrest.

Floyd, who wore an anti-virus mask bearing an image of his brother, wiped his forehead and fought back tears as he implored lawmakers to “listen to the call” he and protesters were making for justice.

“Maybe by speaking with you today, I can make sure that his death will not be in vain.”

After the hearing, fist raised, he joined demonstrators on the streets outside the White House demanding justice and police reforms.

“There is systemic racism not just in our law enforcement but also in housing, education, and everything we do,” Democratic presidential candidate Joe Biden tweeted after the hearing.

“We have to do the hard work to end it.”

‘The pain of America’

George Floyd, 46, died in police custody in Minneapolis on May 25, when a white officer, who has since been charged with murder, pressed his knee on Floyd’s neck for nearly nine minutes.

Protests — some violent, most peaceful — erupted nationwide in some of the most serious US civil unrest in generations.

Lawmakers united in expressions of sorrow and support for Floyd, with longtime House Republican Jim Sensenbrenner telling him: “The pain of your brother I think has become the pain of America.”

The five-hour-plus hearing came after congressional Democrats unveiled a package of reforms this week aimed at ending police brutality.

The legislation would ban chokeholds, make it easier to prosecute officers for abuse, require anti-racism training and bar fired personnel from working in police forces in other districts.

It would also restrict police departments’ use of qualified immunity, which shields officers from being held personally responsible for wrongdoing.

“If there is no accountability,” Floyd family lawyer Benjamin Crump said, police brutality and other abuse “will keep happening.”

House Judiciary Committee chairman Jerry Nadler said that while most cops were decent and law-abiding, there was a “systemic problem” in law enforcement that requires comprehensive solutions.

With lawmakers agreeing on the need for a genuine discussion about police treatment of African Americans, several Republicans including Jim Jordan expressed their desire to enact reforms.

“It’s as wrong as wrong can be,” Jordan told Philonise Floyd about George’s death, “and your brother’s killers will face justice.”

Lawmakers heard too from the sister of a security officer who recently died in Oakland, California, in a shooting blamed on protesters.

“We will never solve generational, systemic injustice with looting, burning, destruction of property and killing in the name of justice,” said Angela Underwood Jacobs, who extended her condolences to Floyd’s brother.

She also described as “ridiculous” calls by leftist activists to “defund the police,” an effort that has been attacked by President Donald Trump and Republicans as dangerous and misguided.

Jeffries noted how several white accused mass murderers were arrested without incident while many unarmed black Americans have been killed in police encounters.

“I don’t know why you’re making a racial thing of it,” Bongino said.

Meanwhile in Minneapolis, Police Chief Medaria Arradondo said he was launching reforms to provide “a new paradigm of peacekeeping” for the community.

The move is an apparent bid to appease the city council which recently pledged to dismantle the police force.