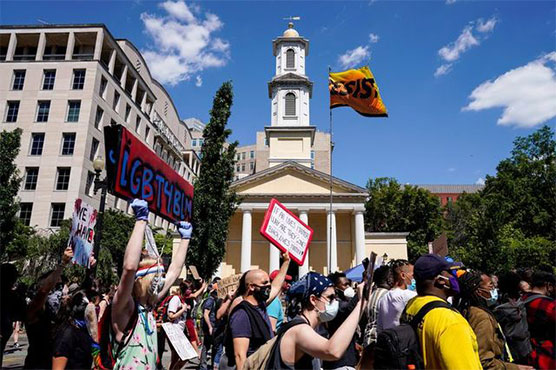 WASHINGTON (AFP) – The number of confirmed coronavirus infections in the United States topped two million on Wednesday, according to a tally by Johns Hopkins University.

The pandemic has claimed the lives of more than 112,900 people in the United States, which leads the world in the number of confirmed infections with 2,000,464, according to the Baltimore-based school s latest count.

The US continues to record around 20,000 new cases of COVID-19 every day, and is struggling to come down from that plateau as the level of infections wax and wane in different parts of the country.

In Texas and North Carolina, for example, there are currently more COVID-19 patients hospitalized than there were a month ago.

With half a million tests performed per day, the country is the world champion in screening per capita.

According to an average of 11 epidemiological models conducted by researchers at the University of Massachusetts, the number of COVID-19 deaths in the US is expected to approach 130,000 by July 4, Independence Day.

– George Floyd protesters urged to get tested for COVID-19 –

Washington, DC, on Wednesday urged people who had participated in protests against police brutality and systematic racism to get tested for the coronavirus.

The federal district joins a number of other locales, including Boston, Dallas and the state of New York, that have asked protesters to be tested, after thousands of people flooded the streets in demonstrations amid the pandemic that has sickened nearly 2 million Americans and killed about 112,000.

“If you are concerned that you have been exposed while out in the community or out at one of the demonstrations, we urge you to get tested … between three and five days, not sooner,” the federal district s mayor, Muriel Bowser, told reporters.

The district is encouraging protesters to monitor themselves for signs and symptoms of the respiratory disease. It also encouraged them to work from home, if possible, for 14 days and restrict their movements, though top DC health official LaQuandra Nesbitt added that such restrictions were not the same as quarantining.

The US capital has ramped up its availability of free testing, including offering COVID-19 tests at fire stations on evenings and weekends.

The calls for protesters to seek testing come as some public health experts, including top US infectious disease expert Anthony Fauci, have warned that the demonstrations could lead to a spike in cases of the coronavirus.

Already, the DC National Guard has reported that some of its troops have tested positive for the virus, though it has not provided numbers for how many of them have been affected.

The protests, which started in Minneapolis and spread across the country and worldwide, were sparked by the death of George Floyd in Minneapolis. An African American, Floyd died after a white police officer pinned his knee against his neck, preventing Floyd from being able to breathe.

The US capital has seen some of the largest protests in recent days.