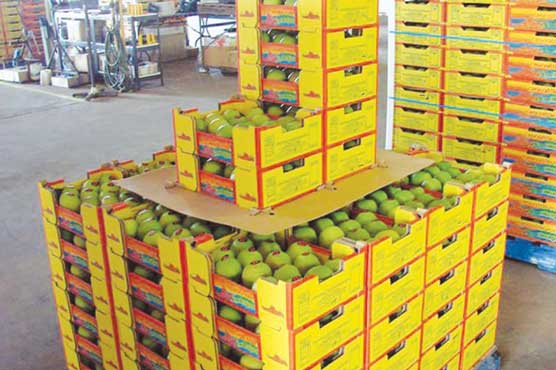 ISLAMABAD (Web Desk) – According to Waheed Ahmed, the Patron-in-chief All Pakistan Fruit & Vegetable Exporters, Importers & Merchants Association (PFVA), the export of mango during this year is likely to witness 70% drop in the export volume of mango compared to the previous mango season due to hurdles in export of mango to Iran & higher Air freight cost of export consignment of mangoes to the European market. Logistic issues coupled with difficulties in having access to the International markets is posing stiff challenge to the export of mangoes thus multiplying the problems of mango exporters day by day. The PFVA is effectively highlighting these serious to the high –ups by exploiting immense potential of the media which has certainly assisted in prompt resolution of various issues as well, however two major issues need quick decisions on national level which includes barriers in export of mango to Iran and various issues related to the national carrier for export of mango to the Europe.

The consistent efforts of the PFVA have ultimately drawn attention of the Members National Assembly. The special committee of the National Assembly (NA) on Agriculture in its session to be held on 15th June 2020 would discuss two serious issues related to problems being encountered in export of mango to Iran along with issues related to PIA in export of mango to the European market. This meeting in NA would be chaired by the speaker NA, Mr. Asad Qaiser. The significance of this session can be well gauged by the fact that the Federal Ministers, MNAs, Ministry of National Food Security & Research, Ministry of Commerce, Ministry of Aviation along with Secretaries from the concerned Ministries and high officials would participate while Waheed Ahmed from the PFVA would represent exporters and members of the organizations representing growers.

Waheed Ahmed stated that the Foreign Carriers hold 90% share of mango export volume by Air and hence the freight charges paid to these airlines in the form of huge amount of foreign currency in repatriated out Pakistan. The PFVA always strongly desired that their exporters shall have business with the national carrier, however these sincere efforts by the Association has never been fruitful because of unrealistic business strategy and sub –standard freight services. During the current year while the foreign carriers have enhanced their freight charges exorbitantly and our specific sector (Fruit & vegetables) in particular is experiencing lot of problems in export perishable cargo (Fruits s & Vegetables ) to different countries of the World , the role of our national carrier has assumed paramount importance but unfortunately the national carrier is not only following the foot-steps of the foreign carriers in charging high cost of freight but it also seriously lacks in technical expertise required in handling export consignments of mangoes ! The PFVA had a meeting with concerned officials of the P.I.A. on 21st May 2020 requesting for provision of better service and reasonable freight cost for operating chartered flights for export of mangoes , however this request could not be materialized due to insufficient resources and higher freight cost by the national carrier. These issues have been brought into attention of the Federal Govt. as well the concerned Ministries but nothing has so far been done to seriously address and resolve the issue. However it is strongly anticipated that the special committee of the NA along with other ministries would find realistic & durable solution so that our weak economy which is badly affected by COVID-19, can be provided adequate support by generating foreign exchange through exports.

Like PIA, the export of mango to Iran via land route is also suffering badly due to various serious issues. The number of trucks carrying Pakistani mangoes to Iran through Taftan border are piling up with each passing day whereas the less number of trucks coming from Iran to Pakistan and with restriction on limited number of working days as well short time frame available for the each day for the mango trucks to get into Iran , the huge number of trucks carrying mango consignments worth of millions of USD to Iran are forming long queues at the Pak-Iran border and as a result of that the mangoes have started getting spoiled due to in-ordinate delay in movement to cross the Taftan border . It’s an irony that despite high demand of Pakistani mango in Iran, Pakistan is unable to avail this golden opportunity, The concerned Govt, authorities have been apprised of these issues and requested that number of working days as well duration of time frame for each day be extended for mango & other perishable fruits & vegetables making it easier to facilitate trade through Pak- Iran border. The special committee of the NA would focus its attention on these issues and it’s strongly hoped, these issues would be amicably resolved with close co-ordination of the concerned Ministries, keeping the supreme national interest in view.

During this specific time when COVID-19 has emerged as a big challenge for the entire world leading to immense pressure on various Industries, significant drop in exports and retardation in the economy limiting the job creation, the horticulture sector is the only specific business sector where there are bright chances to enhance export of fruits and vegetables .Pakistan can earn valuable foreign exchange by exporting its surplus production of Agriculture produces , fruits & vegetables . Various sectors are indirectly linked to the trade of fruits & vegetables in getting employment for its people working in these sectors which includes Factories employing labourers, Packaging Industry, businesses of transportation , Airlines, Shipping companies and related employments . Many new investors and businessmen are being attracted towards trade of fruits & vegetables due to increase in economic difficulties and thus it would lead to generation of opportunities for employments. Pakistan can get out of current severe economic cries if the trade of fruits & vegetables as well it’s export is seriously considered a bright opportunity and its enormous potential can be fully exploited if export Industry is supervised by the GoP and issues of this industry is sincerely resolved. This way Pakistan can not only successfully handle stiff economic challenges but also can take well care of its domestic need for agriculture produces simultaneously taking full advantage of opportunities emerging in the International markets .