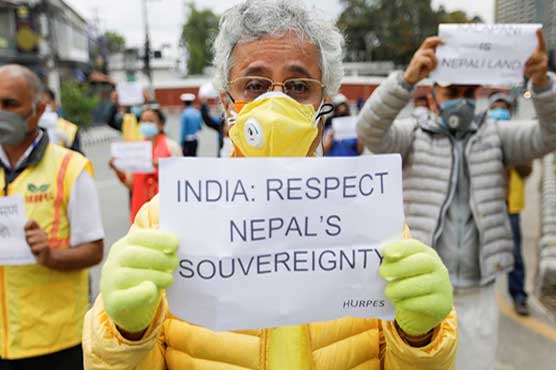 With relations between the two strained by their frontier squabble, India quickly hit back saying the action was “not tenable”.

The two have been wrangling since India last month opened a new 80-kilometre (50-mile) road in Uttarakhand state leading up to the disputed Lipu Lekh pass.

Nepal condemned the move and its cabinet decided to publish a new political map that includes Lipu Lekh and contested zones in Kalapani and Limpiyadhura.

An amendment bill for a revised national emblem to include the new map was passed by the House of Representatives on Saturday. Speaker Agni Prasad Sapkota said there were no votes against.

The amendment will have to be endorsed by the National Assembly and the president before it is implemented.

The neighbours are wrangling over a region of more than 300 square kilometres (115 square miles) where the Nepali and Indian borders touch China.

Nepal claims the Lipu Lekh under an 1816 treaty that sets the boundary with India along the Kali River. Disputes have arisen because neither side can agree its source.

Nepal claims the adjoining Kalapani region even though Indian troops have been deployed there since India and China fought a border war in 1962.

Nepal has since deployed security forces close to Kalapani.

Nepal and India have agreed to hold talks on the dispute but Kathmandu says its neighbour will not set a date.

Following Saturday’s vote, India’s foreign ministry spokesman Anurag Srivastava said: “The artificial enlargement of claims is not based on historical fact or evidence and is not tenable.

“It is also violative of our current understanding to hold talks.”

Nepal reacted angrily last month after Indian army chief General M.M. Naravane commented that Nepal’s reaction might have been “at the behest of someone else”, hinting at China’s involvement.