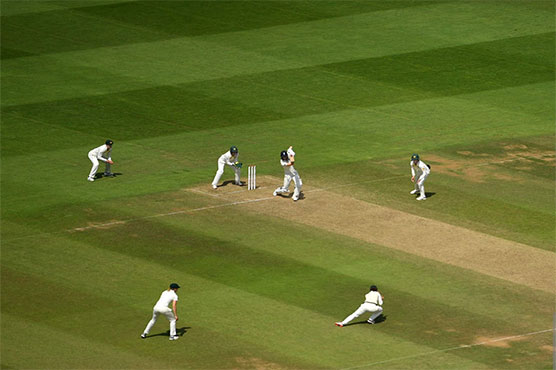 If we were on the Moon, we’d start cricket, say Czech players

PRAGUE (AFP) – Hit hard by the coronavirus pandemic, cricket resumed in Prague this weekend where players shrugged off the summer rain by declaring: “If we were on the moon, we d start cricket”.

Featuring largely expats, the European Cricket Network s (ECN) Czech Super Series is one of the first cricket events worldwide played in the wake of the COVID-19 lockdowns.

“We ve only been able to play here now because of the way the whole country responded” to the pandemic, said Terry O Connor, Czech cricket league administrator.

He pointed out the recent easing of restrictions taken by the EU member country of 10.7 million people in March when the virus began to spread across Europe.

For the event pitting 16 Czech teams, and spread over five weekends until July 12, the Vinor grounds on Prague s outskirts are divided in three parts to separate the players, the crowd and officials.

“We re keeping everyone distanced — but cricket is not a contact sport,” said O Connor.

“There aren t really any adjustments to play other than following the International Cricket Council s (ICC) guidelines in regards to using saliva on the ball,” he added.

For Javed Iqbal, a 39-year-old Pakistani-born bowler with the Bohemian Cricket Club, the virus restrictions pose no problem.

“Yesterday it was very hot so we didn t need saliva, it was enough to wet our fingers against the forehead,” said the former athlete and basketball player, who came to Prague in 2014 to get a degree in forestry.

“It s not that difficult, especially here in these wet conditions,” he told AFP as the organisers cancelled his team s match against the United Cricket Club amid steady rain.

Iqbal let his face mask — still mandatory in some places in the Czech Republic — hang loosely down his neck.

“We keep a distance from one another. And we re like a family and in a family you don t need to be restricted,” he chuckled.

While Iqbal s native Pakistan, and other cricket powerhouses are still taking a break from the sport, Bohemian Cricket Club — relying largely on Asian students — won their two opening matches on Saturday.

“Wherever there are Pakistanis, Indians and Sri Lankans, they will definitely play cricket because it s in their blood,” Iqbal said.

“Even if they were on the Moon they would start cricket there.”

Iqbal, who sees his future as the Bohemian Cricket Club manager, has played for the Czech national team in the past.

Sitting 54th in the ICC s T20I rankings, the Czech Republic team does not rely solely on expats.

“It s more common than not that we actually have Czechs on the team,” said O Connor.

“In the past we would be playing against other European countries and we d have three, four, five Czechs and none of the other opposition would have native members,” the Australian, living in Prague, told AFP.

Czech cricket is pinning hope on its academy which introduces school children to the sport, organises weekly games and runs three junior clubs.

“To me the long-term sustainability of the sport in this country and success at the national level is about getting some of those juniors to keep coming through,” O Connor said.

While in adult cricket Czechs make up only a dozen of 300 players, the proportion is the exact opposite in children s cricket with just over a dozen foreigners among 400 players.

“The best thing is the youngsters, we have really good youngsters who are still under 14,” said Iqbal.

“Czech cricket will be on a high level within a few years — if they show the same spirit, the way they play now.”

O Connor predicted the Czech national team could move to the 40th spot in five years, but Iqbal was even more optimistic.

“We have very close competition with most teams and maybe in the future, when we have the opportunity to play against them, 30 is very easy to achieve within a few years,” he said.