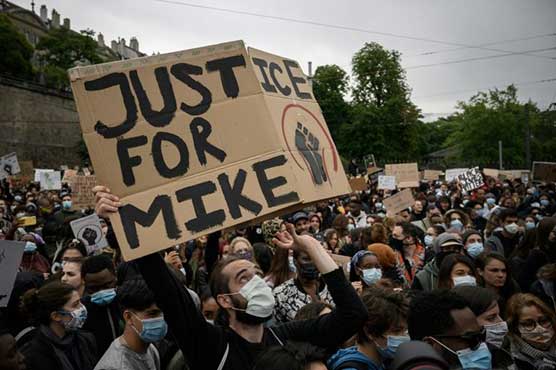 The embassy had unfurled a banner on the building reading “Black Lives Matter” at the weekend in solidarity with the increasingly global movement that has emerged after the killing of African American George Floyd while in Minneapolis police custody.

In a Facebook message o GENEVA, June 16, 2020 (AFP) – George Floyd’s shocking death in police custody in the US has sparked belated soul-searching in Switzerland over the death of a Nigerian man two years ago in Lausanne in seemingly similar circumstances.

The 46-year-old black man died in Minneapolis on May 25 after a white officer, who has since been charged with murder, pressed his knee on his neck for nearly nine minutes.

In contrast, the death of Mike Ben Peter, a 37-year-old Nigerian man, in Lausanne in March 2018 received little attention beyond the western Swiss city, where it sparked a small demonstration against police violence.

But the global outcry over Floyd’s death has pushed the Swiss to re-examine their own strikingly similar case.

Ben Peter died following a violent arrest after he refused a police search.

In the encounter, involving six police officers, he was pinned to the ground, on his stomach, according to his family’s lawyer Simon Ntah.

“He was held in positional asphyxia” for several minutes, Ntah told AFP.

The lawyer said he believed there were “enormous similarities” with Floyd’s killing, adding though that the situation was likely “a bit more serious in Ben Peter’s case, due to the violence that preceded him being pinned down on his stomach”.

But the main difference, he said, “is that in the US case, the facts were filmed and we can thereby see exactly how the knee was placed on the neck.”

Two years on, Ben Peter’s death is still under investigation.

In a coincidence of timing, Swiss medical examiners were questioned about their findings in the Ben Peter case just hours after Floyd’s death.

They are due to face further questioning before a likely trial, at the end of this year or in 2021.

Landing in the midst of the Floyd outrage, the medical examiners’ testimony sent shockwaves through the wealthy Alpine nation.

Leading newspapers declared that “Switzerland too has its George Floyd”, while protesters at anti-racism demonstrations in several Swiss cities shouted the two men’s names in unison.

“Fight for Mike Ben Peter”, read one of the protest posters in Lausanne.

Odile Pelet, a lawyer representing one of the police officers in the case, meanwhile rejects the “conflation” of the facts in the two cases, stressing that the autopsy formally excluded that Ben Peter died from asphyxiation.

“The images of George Floyd’s arrest show that the situations are absolutely not comparable,” she told AFP.

“Never did any of the six police officers place their knee on Ben Peter’s neck.”

The medical examiners concluded that a range of factors contributed to his death, including stress, obesity and heart problems.

They also mentioned the position he was held in, on his stomach, she acknowledged, “but without being able to really determine what role it may have played in his death”.

Jean-Christophe Sauterel, head of the regional police force in the canton of Vaud, where Lausanne is located, meanwhile said he could not comment on a case still under investigation.

But he stressed that in Switzerland, police can apply pressure to a person’s arms or shoulders to bring them under control, but putting pressure on the head or neck is “totally forbidden”.

In recent demonstrations in Switzerland against police brutality and racism, Ben Peter has not been the only name mentioned alongside Floyd.

Protesters and Swiss media recall that Herve Manbdundu and Lamine Fatty also died during or following police interventions in Vaud in 2017 and 2016 respectively.

“In the same way that the #MeToo movement has opened the way for very, very positive developments, there is today a movement of awareness raising when it comes to police racism,” Ntah said.

Many observers, including Amnesty International, meanwhile maintain that systemic racism does not exist in Swiss police forces.

Frederic Maillard, an analyst of policing practices, also said Switzerland does not have a problem with “racist and violent police”, pointing out that the hierarchy demands a “measured” approach.

However, he warned, as elsewhere, police have a tendency to cover for colleagues’ bad behaviour, and “there is too little behavioural training to prevent abuses and excesses on the ground”.
n Saturday, the embassy said the banner “shows our support for the fight against racial injustice and police brutality as we strive to be a more inclusive & just society”.

On Twitter, the US ambassador to South Korea Harry Harris said he believed that from “diversity we gain our strength” and quoted late president John F. Kennedy.

Harris is Japanese-American and previously told embassy staff that he was “deeply troubled about the events surrounding the brutal killing of George Floyd in Minnesota and the ongoing aftermath”.

“As an Asian American who was raised in the segregated South of the 1960s, I never thought I would see this happening again, especially in the 21st century,” he added in a message.

But the BLM banner was taken down on Monday, with CNN quoting an anonymous source saying that the request to do so came from the office of Secretary of State Mike Pompeo.

The embassy also removed a rainbow flag, a symbol of the LGBTQ equality movement — hours before a landmark US Supreme Court decision that outlawed discrimination against workers based on sexual orientation.

On Tuesday a huge banner commemorating the 70th anniversary of the Korean War covered the space previously occupied by the two emblems, featuring a black and white photograph of a bugler in a military cemetery and a Korean-language message reading: “We don’t forget.”

In a statement, an embassy spokesperson said the removal of the BLM banner “in no way lessens the principles and ideals expressed by raising the banner, and the embassy will look for other ways to convey fundamental American values in these times of difficulty at home”.

Pompeo, an evangelical Christian who in the past has said that he defines marriage as between a man and a woman, last year restricted the flying of rainbow flags, as some embassies had been doing each June for Pride Month, which celebrates the movement for LGBTQ equality.

Pompeo had ordered that only the US flag should fly from embassy flagpoles. The pride flag in Seoul was on the building facade near the Black Lives Matter sign, not on the pole.

Trump and Pompeo have both condemned the killing of Floyd and spoken in general terms of the need to reform law enforcement.

But Trump has described himself as bringing “law and order” and vilified the protest movement.