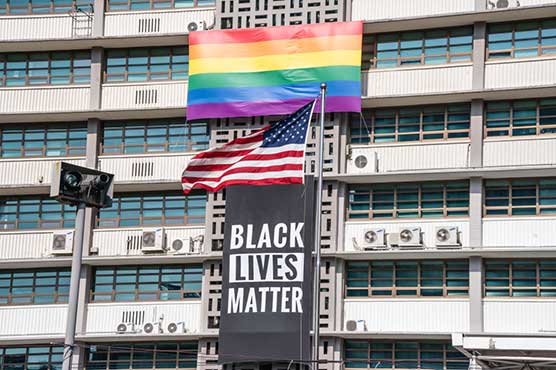 The embassy had unfurled a banner on the building reading “Black Lives Matter” at the weekend in solidarity with the increasingly global movement that has emerged after the killing of African American George Floyd while in Minneapolis police custody.

In a Facebook message on Saturday, the embassy said the banner “shows our support for the fight against racial injustice and police brutality as we strive to be a more inclusive & just society”.

On Twitter, the US ambassador to South Korea Harry Harris said he believed that from “diversity we gain our strength” and quoted late president John F. Kennedy.

Harris is Japanese-American and previously told embassy staff that he was “deeply troubled about the events surrounding the brutal killing of George Floyd in Minnesota and the ongoing aftermath”.

“As an Asian American who was raised in the segregated South of the 1960s, I never thought I would see this happening again, especially in the 21st century,” he added in a message.

But the BLM banner was taken down on Monday, with CNN quoting an anonymous source saying that the request to do so came from the office of Secretary of State Mike Pompeo.

The embassy also removed a rainbow flag, a symbol of the LGBTQ equality movement — hours before a landmark US Supreme Court decision that outlawed discrimination against workers based on sexual orientation.

On Tuesday a huge banner commemorating the 70th anniversary of the Korean War covered the space previously occupied by the two emblems, featuring a black and white photograph of a bugler in a military cemetery and a Korean-language message reading: “We don’t forget.”

In a statement, an embassy spokesperson said the removal of the BLM banner “in no way lessens the principles and ideals expressed by raising the banner, and the embassy will look for other ways to convey fundamental American values in these times of difficulty at home”.

Pompeo, an evangelical Christian who in the past has said that he defines marriage as between a man and a woman, last year restricted the flying of rainbow flags, as some embassies had been doing each June for Pride Month, which celebrates the movement for LGBTQ equality.

Pompeo had ordered that only the US flag should fly from embassy flagpoles. The pride flag in Seoul was on the building facade near the Black Lives Matter sign, not on the pole.

Trump and Pompeo have both condemned the killing of Floyd and spoken in general terms of the need to reform law enforcement.

But Trump has described himself as bringing “law and order” and vilified the protest movement.