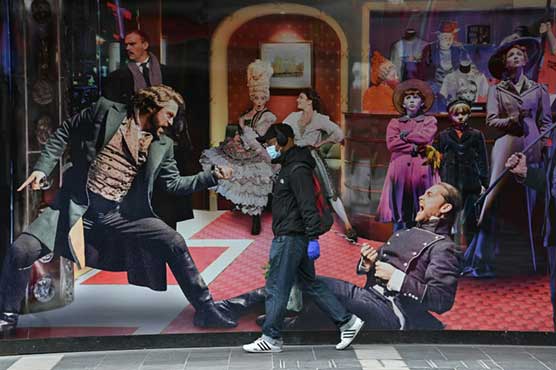 LONDON (AFP) – London’s West End has traditionally drawn people from all over the world to see its shows but theatres have been forced to reinvent themselves because of the coronavirus outbreak.

Fifteen million tickets are sold each year for performances including top attractions such as “The Phantom of the Opera”, “Les Miserables” and Agatha Christie’s “The Mousetrap”, a play that has been performed since 1952.

But the pandemic brought the curtain down on venues in March, leaving theatres facing an uncertain future where continued social distancing measures threaten their existence.

Louis Hartshorn and Brian Hook, co-founders of Hartshorn-Hook Productions, are among the first to adapt to the new reality, announcing the reopening of an immersive adaptation of “The Great Gatsby” to open in October.

“The show will be reimagined as a masquerade ball,” Hook told AFP.

Spectators are invited to wear masks, which they can integrate into their disguise, and gloves if they wish.

The audience will also be reduced to 90, down from 240 previously, and the schedule has been changed to allow for thorough clean-ups.

The good news is that tickets are “selling and people want to come back”, added Hook.

But Hartshorn admitted that “we have to do extremely well in order to break even because the numbers are against us”.

Another immediate challenge is the lack of tourists, with hotels, restaurants and museums closed until at least early July.

The introduction on June 8 of a 14-day quarantine for most travellers arriving in the country has also tempered hopes of a swift recovery.

“Around a third of attendees in London theatres are overseas tourists… and for the moment of course there is very little prospect of having overseas visitors,” Julian Bird, head of the UK Theatre lobby group, told a recent parliamentary committee.

Up to 70 percent of theatres could go bankrupt by the end of the year, he warned.

In the traditional world of theatre, social distancing measures are a real headache.

With people having to remain two metres (six feet) apart, under current rules, the Royal Shakespeare Company said it can only accommodate 20 percent of its usual audience.

“With the furlough scheme changing in nature over the coming months and then coming to an end, that’s a moment of extreme vulnerability,” Catherine Mallyon, executive director of the Stratford-upon-Avon based company told AFP.

“And how would we do the performances with social distancing? ‘Romeo and Juliet’ two metres apart, it’s quite hard to imagine,” she said.