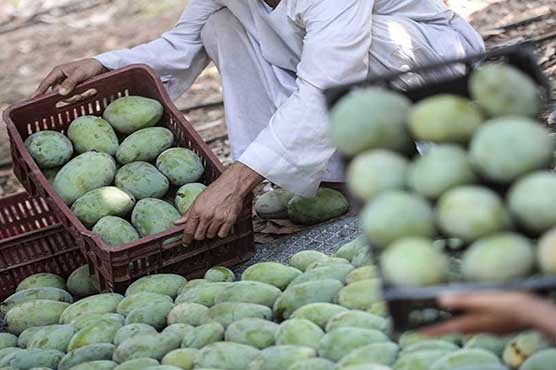 ISLAMABAD (Reuters) – A combination of a coronavirus-spurred trade slowdown, locust attacks and odd weather have created a nightmare year for growers and exporters of Pakistani mangoes, with both production and demand plummeting this year, they said.

Domestic and international markets for the sought-after sweet seasonal fruit have been hit as harvests and exports have dropped by at least a quarter, they noted.

Muhammad Ansar, a small-scale grower from the Sanghar area of central Sindh province, said his mango production had fallen 30% this year as a result of locust attacks.

It was unusual for a broad belt of Pakistan s mango-producing areas to be hit by the pests, he added.

“We face double problems this year: the low production followed by less demand in markets due to the prolonged lockdown because of coronavirus,” Ansar said.

He usually sells about 500 crates of mangos, each weighing 10kg (22 pounds), but this year has harvested only 200 crates and could “hardly find any demand for export”.

Pakistan is the world s fifth-largest mango producer, after India, China, Thailand and Indonesia, according to Pakistan s Chambers of Commerce and Industry.

But Abdul Waheed, a top mango grower and exporter and head of the All Pakistan Fruit and Vegetable Exporters, Importers and Merchants Association, said erratic weather linked to climate change was taking a toll on mangoes and a wide range of other crops in Pakistan.

Yields are falling and harvest seasons are shifting, he said, noting that “this change in weather conditions has weakened the resistance of mangoes to fight diseases”.

“It ultimately damages mangoes at large scale,” he said.

Punjab, which produces about 70% of Pakistan s mangoes, has seen production fall more than 35% this year, mangro growers and traders estimate, while Sindh province s harvest is down 15%.

Finding markets for the mangoes that are harvested is another problem.

Ahmad Jawad, chair of the agriculture standing committee for the chamber of commerce, said Pakistan s mango exports, which last year stood at 130,000 tons, may drop by 30,000 tons this year.

In the south London neighbourhood of Tooting, where mango stands run by vendors of Pakistani descent are a seasonal highlight, prices for most varieties have doubled this year – and profits are down.

“You cannot sell it,” said Asif Khaliq, standing over a big display of the golden fruit. “We can t convince the customers to understand” why prices are so much higher than last year, he told the Thomson Reuters Foundation.

With air freight prices triple those a year ago, a box of a dozen mangoes that last year sold for 12 pounds ($15) is now going for 22 pounds, just a little over the wholesale price.

“At the end of the day, the profit is nothing,” Khaliq said. “We just want to continue the business.”

“We are seeing such a bad, uncertain situation in this field for the first time in three generations of my family business,” he added.

Freight charges to send mangoes to European countries and Britain have more than tripled since last year, and costs have doubled for exports to the United States and Gulf countries, Waheed said.

Tariq Khan a large-scale mango grower in Multan, a city in southern Punjab province, said Punjab had lost as much as 40% of its production this year, in part because of an unusually long and cold winter.

Last year, the country saw record mango production of 1.8 million tons but growers fear this year they will produce no more than 1.1 million tons.

Taj Naseeb Khan, horticulture director for the National Agriculture Research Council, said a long winter combined with strong thunderstorms early in the season hurt production in most of the country s mango-growing areas.

This year s locust plague also hit young mangoes, though the worst damage could come next year if the pests are not eliminated before they breed, he said, urging “wide-ranging spraying to control them”.

One local benefit of the collapse in mango exports is more – and cheaper – availability of the fruit at home.

Safeer Abbasi, a vendor in downtown Islamabad, said mangoes of all qualities are about 25-30% cheaper this year.

“It seems that the closure of big hotels and markets help to bring their prices low. We hope they will further come down in coming weeks,” he said.

Asian markets drop into the red as traders take step back