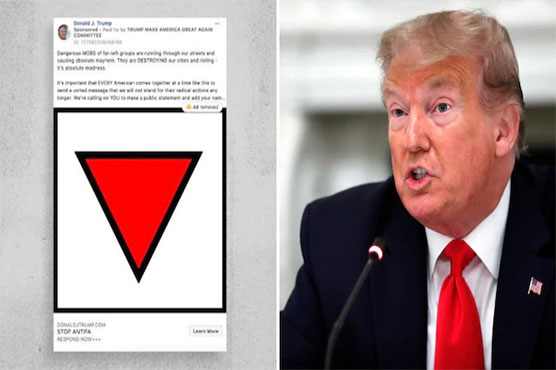 The leading social network, which has drawn fire over its hands-off approach to political speech in recent months, said the campaign messages with an inverted red triangle and used in Nazi camps violated a policy against “organized hate” and were taken down.

“We don t allow symbols that represent hateful organizations or hateful ideologies unless they are put up with context or condemnation,” Facebook head of security policy Nathaniel Gleicher said at a House of Representatives committee hearing.

“That s what we saw in this case with this ad, and anywhere that that symbol is used we would take the same actions.”

Recently Facebook founder Mark Zuckerberg reiterated that the platform will steer away from moderating political speech but would enforce its rules barring content promoting physical harm.

In a tweet from a “Trump War Room,” the campaign contended the upside-down red triangle symbol at issue was “widely used” in reference to left-wing activist group Antifa.

Watchdog group Media Matters replied with a tweet saying that is not the case.

Since early this month, the Trump campaign has been running “fearmongering” ads about what it says is a far-left group called “antifa,” according to Media Matters.

The upside-down red triangle was apparently a new addition to the ad, according to Media Matters, which found at least 88 ads on Facebook pages with that symbol.

Tim Murtaugh, a Trump campaign spokesman, said that “Facebook still has an inverted red triangle emoji in use, which looks exactly the same, so it s curious that they would target only this ad.”

Jonathan Greenblatt, chief executive of the Anti-Defamation League, said the president s campaign “needs to learn its history, as ignorance is no excuse for using Nazi-related symbols.”

Greenblatt added on Twitter: “The Nazis used red triangles to identify their political victims in concentration camps. Using it to attack political opponents is highly offensive.”

The move by Facebook is unlikely to end a raging battle between social media firms and the White House, which has claimed the Silicon Valley firms are biased against conservatives, despite Trump s large following.

Facebook has steadfastly rejected calls to fact-check politicians including a plea from Democratic White House hopeful Joe Biden to clamp down on what he called rampant disinformation from the White House.

The California tech giant noted that it has removed Trump ads in the past for policy violations including a ban on interfering with the US census.

Facebook is under pressure to clamp down on political misinformation following failures to block foreign influence campaigns in the 2016 US election, while at the same time remaining an open platform for election debate.

Earlier this week, Facebook made a new move by allowing users to turn off all political ads

The feature being rolled out in the United States and some other countries will give Facebook and Instagram users the option of blocking paid ads from candidates and political groups.

The large platform has split from Twitter, which earlier this year decided to label comments by Trump as misleading and in another case to limit the reach of the president s comments for violating the platform s policy on promoting violence.

Zuckerberg has maintained that “the best way to hold politicians accountable is through voting, and I believe we should trust voters to make judgments for themselves.”

NAB approves to transform inquiry against Rana Sanaullah into investigation