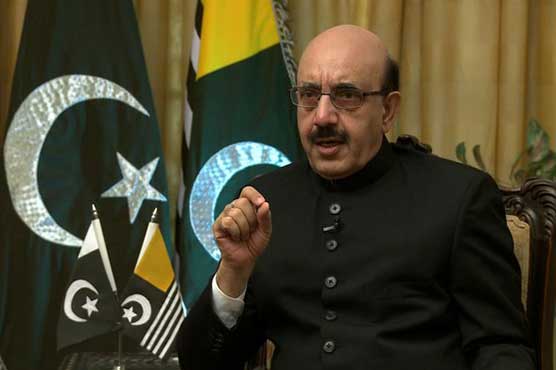 MIRPUR (City News) – India’s election to the UN Security Council is a travesty of justice and a mockery of the international rule of law, said Sardar Masood Khan, President of Azad Jammu & Kashmir.

The President said in an interview to a foreign TV network Sunday that when a delegation of the fascist BJP-RSS regime would be sitting on the Council in January 2021, Indian occupation forces’ hands would be drenched in the blood of Kashmiris, AJK Presidential said.

India, he said, would have no qualifications to uphold the mandate of the Security Council for the maintenance of international peace and security.

With India’s entry into the Council, the international order will fray further at a time when the United National is being marginalised. The world is slowly moving towards anarchy because the worst violator of human rights and a trampler of peace and security is giving a seat on a prestigious multilateral forum like the Security Council.

The BJP-RSS regime, he said, is a colonial power that in front of the whole world is killing and brutalising Kashmiris, blinding them, mowing down youth in fake encounters, and raping and objectifying women. Such a regime, known for its despotism and chicanery, deserves to be sanctioned and stockaded, not rewarded with a seat in the Security Council.

“India is a predator in the region which has chosen to violate international law with impunity. It is occupying en masse a disputed foreign territory – Kashmir – and calls it an internal matter”, the President said adding that it is no more the old practice of legal and military salami slicing of the past 73 years in IOJK but gobbling up of the entire state in one go without the consent of its owners.

India has invited and fuelled disputes with all its neighbours and made the entire neighbourhood volatile by its intimidation and aggression. “For that should it not be in the Security Council’s dock rather than on a horseshoe seat?” he asked President Masood Khan said that India has revived the Nazi Party’s Nuremberg laws of the last century and imposed them on the Kashmiri population in the form of new domicile rules.

Non-native Hindus would be settled in Jammu and Kashmir and qualify for half a million jobs and Kashmiris will run from pillar to post to prove that their homeland is theirs and that they too can qualify for these jobs which used to be reserved for them.

“This is the most brazen land grab through the barrel of the gun in the 21st century. Those who would oppose these war crimes and genocide will be exterminated and erased. Demographic changes in Kashmir today are no less grave than the cases on ethnic cleansing in the Balkans and the Great Lakes region in the 1990s. Why is the Security Council not, this time around, shocked round the clock? Are the screams of Kashmiris not reaching their closed and open chambers or their virtual conference space?” the President asked.

President Masood Khan appealed to the international civil society to block the passage of India to the Security Council for the sake of humanity because it is entering into that body only to indemnify its crimes against humanity in the Indian Occupied Jammu and Kashmir, glorify its lebensraum in the region and hide its religious apartheid against Muslims, Christians, Sikhs, Dalits and tribals in India.

The President warned: “Make no mistake. India is going into the Council to promote its own heinous agenda of occupation, irredentism and expansionism; and to make a bid for a permanent seat. But even within the Council, its diplomatic bullying would be so obnoxious that no permanent member will be sincerely ready to consider giving them a seat around that table”, Masood Khan said.

He asked: “Will India dare to put Kashmir on the active agenda of the Council for a just and lasting resolution of the issue in accordance with the existing decisions of the Council. There is every possibility that it would either stymie the debate on Kashmir or attempt to guillotine the issue altogether.”

He warned that during India’s presence in the Council, the funding and mandate of the UN Military Observer Group in India and Pakistan would be at risk. “We need to remain vigilant”, he said.

The AJK President said that the dysfunctional electoral system of the UN sends a known warmonger like India to the hallowed Council chambers without any scrutiny. How can India be given a seat when its violent extremist prime minister openly, twice, threatened to wipe Pakistan off the map of the world by the use of nuclear weapons? he asked.

And their ministers talk of attacking Azad Jammu and Kashmir and Gilgit-Baltistan militarily and intensify proxy wars, inducing terrorism, in Pakistan. Would such a country in any way contribute to peace and security anywhere in the world?

President Masood Khan said that in the Council “India would be there to stoke, not douse, fires”.

Thunderstorm, rain and strong winds expected in parts of Kashmir