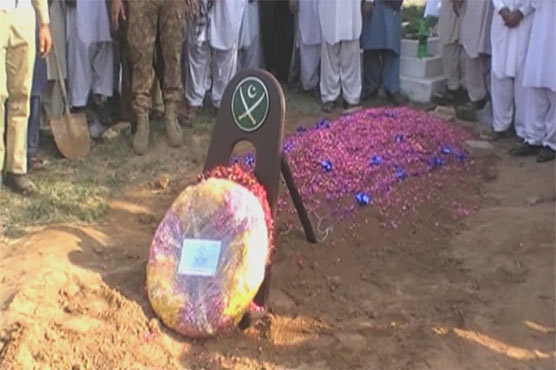 RAWALPINDI (City News) – The funeral prayers of Army Captain Sabih Abrar, who embraced martyrdom during exchange of fire with terrorists in Waziristan has been offered.

According to details, a number of civil and military officials attended the funeral prayer of Captain Sabih, who was laid to rest with full military honor in his ancestral village of Pinyali of tehsil Kahuta.

It is pertinent to mention here that Captain Sabih embraced martyrdom during exchange of fire between security forces and terrorists in South Waziristan, a statement issued by Inter Services Public Relations (ISPR) stated.

The incident took place at the boundary of turbulent North and South Waziristan districts, where several military operations have been launched in recent years against militants.

The terrorists opened fire on security forces personnel and in retaliation, Pak Army responded befittingly and destroyed the hideout of the militants.