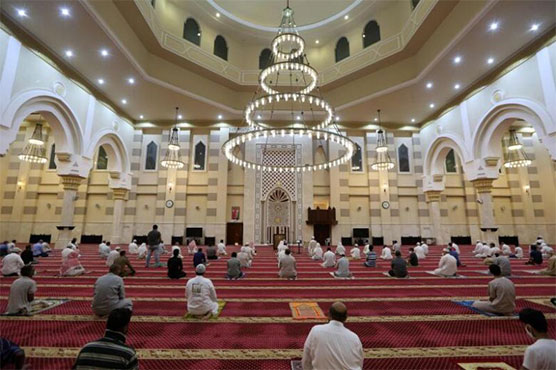 RIYADH (AFP) – Saudi Arabia on Sunday ended a nationwide coronavirus curfew and lifted restrictions on businesses, including hair salons and cinemas, after three months of stringent curbs, despite a spike in infections.

Prayers were also allowed to resume in mosques in the holy city of Mecca, state media reported, just weeks before the annual hajj pilgrimage is due to start.

International flights and religious pilgrimages, however, remain suspended and social gatherings of more than 50 people are prohibited, according to the interior ministry.

But Saudi Arabia s General Commission for Audiovisual Media announced the reopening of cinemas across the kingdom with strict guidelines on social distancing.

“We are happy and cautious at the same time… I have been without a haircut for five months,” said Bashayer, a Saudi customer at a Riyadh hair salon.

“But we are… scared. I sanitise my hands whenever I touch anything,” she said, while a hairdresser clad in a mask and face shield cut her hair.

The kingdom, which has the highest reported coronavirus infections in the Gulf, has seen a spike in cases after it began a phased easing of stringent lockdown measures in late May.

On Sunday, the total number of infections rose to 157,612, while the death toll climbed to 1,267, according to data from the health ministry.

Intensive care units in the capital Riyadh and the Red Sea city of Jeddah are crowded with coronavirus patients, putting pressure on the health care system, medical sources told AFP.

But the decision to lift restrictions comes amid the kingdom s worst economic crisis in decades as it grapples with the twin blow of low oil prices and the impact of the virus.

Mosques outside of Mecca reopened at the end of May, but with strict rules imposing social distancing and other measures.

But the kingdom has said the year-round “umrah” pilgrimage to Mecca and Medina will remain suspended over fears of the coronavirus pandemic spreading in Islam s holiest cities.

Authorities are yet to announce whether they will proceed with this year s hajj, scheduled for the end of July, but have urged Muslims to defer preparations for the annual pilgrimage.

Last year, some 2.5 million faithful travelled to Saudi Arabia from across the world to take part in the hajj, which all Muslims must perform at least once in their lives if able.