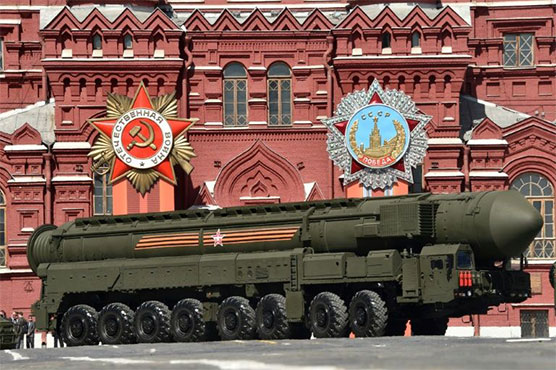 US, Russia hold arms talks with little sign of accord

VIENNA (AFP) – The United States and Russia held talks in Vienna on Monday on their only remaining major nuclear weapons accord with little prospect of imminent agreement, as critics questioned whether either side saw value in arms control.

US President Donald Trump has previously insisted China should be involved in discussions to extend New START, the treaty that limits US and Russian nuclear warheads, because he says Beijing has had a free pass to develop weapon systems.

The current treaty limits each side to 1,550 deployed nuclear warheads.

China has shown no interest, giving Washington more cause for complaint — although critics say the US finds it a useful stick to beat its growing rival.

After a full day of talks at the Niederoesterreich Palace in the Austrian capital, the Russian foreign ministry said only that “discussions on prospects for arms control continued, including the question of extending the New Start treaty and maintaining stability”.

US envoy to the talks Marshall Billingslea said on Monday evening that the talks had been “very positive”.

There had been “detailed discussions” on a “full range of nuclear topics”, he tweeted, without going into detail.

Billingslea added that there was “agreement in principle” between the two sides on holding a second round of talks.

Daryl Kimball of the Washington-based Arms Control Association said before the talks that the Trump administration s focus on China showed that it was not serious about an accord.

“The only conclusion I can come to is that… the Trump administration (does) not intend to extend New START and is seeking to display China s disinterest in trilateral arms control talks as a cynical excuse to allow New START to expire,” Kimball said.

Trump has already scrapped several treaties with Russia — on overflights and on intermediate-range nuclear forces.

Billingslea and Russian Deputy Foreign Minister Sergei Ryabkov headed the delegations discussing the future of New START, which was agreed in 2010 and expires in February 2021.

Shortly before talks began, Billingslea once again raised the issue of what he called China s “no-show” by tweeting a picture of an empty negotiating table decked with Chinese flags.

“Beijing still hiding behind #GreatWallofSecrecy on its crash nuclear build-up, and so many other things,” Billingslea said in his tweet.

China s mission in Vienna responded by ridiculing the tweet as “performance art”.

China s nuclear arsenal is rapidly expanding but is still far smaller than those of the US and Russia.

The current deadlock over New START and the demise of other nuclear arms control treaties “suggest that the era of bilateral nuclear arms control agreements between Russia and the USA might be coming to an end”, said Shannon Kile of the Stockholm International Peace Research Institute.

According to the institute s latest research, Russia has 6,375 nuclear warheads, including those that are not deployed, and the United States has 5,800.

Song Zhongping, a defence analyst in Beijing, said 2,000 warheads would be an ideal arsenal for China, whose main concern is to counter the United States.

“China will never participate in nuclear disarmament negotiations between the US and Russia,” he said.

“The nuclear disarmament talks proposed by the US are only a trap.”

Russian political analyst Fyodor Lukyanov said there was no reason to expect progress in Vienna.

“The Trump administration has rejected nearly all the restraints linked to the treaties agreed in the past,” Lukyanov said.

“There is nothing to suggest that this treaty will be the exception.”

An extension of New START would be “really welcome”, Beatrice Fihn of the International Campaign to Abolish Nuclear Weapons said on Monday.

However she warned that “we need to be sure that they don t lower our expectations so much that simply not unravelling a treaty is considered amazing progress”.

The battle is not over: Rising infections seen worldwide