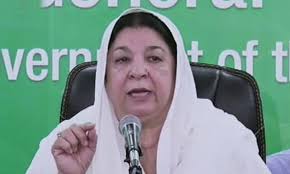 LAHORE (City News) – Punjab Health Minister Dr. Yasmin Rashid on Wednesday has told that seven more areas of Lahore will be sealed from tonight (12:00am) for one week in the wake of preventing spread of coronavirus.

Strategies have been formed to force the residents to follow standard operating procedures (SOPs) prepared by the government against coronavirus, she said.

Dr Yasmin further lauded doctors, nurses and the paramedical staff for serving on the frontline against the deadly disease.

It was decided to strictly implement SOPs to counter novel coronavirus. Jawad Rafique Malik stressed that action will be taken against the violators.

It is to be mentioned here that 96,229 houses and 1.69 million population will be put under lockdown in all blocks of Gulberg (I, II, III), DHA, Faisal Town, Garden Town and interior Lahore Walled City.

The commissioner office told that 3,613 covid-19 cases were reported in these localities.

Akbari Mandi, Shah Alam Market and grocery stores will remain open while all the shopping malls will be closed.