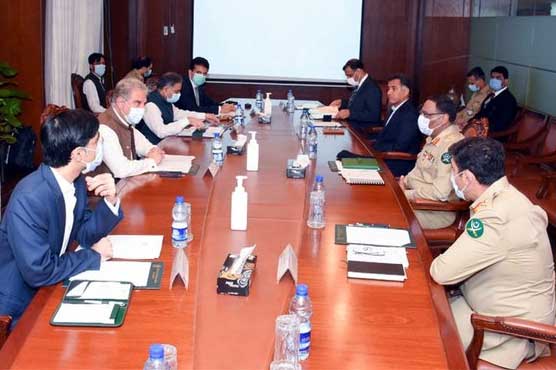 He said this while presiding over a high-level meeting regarding regional security in Islamabad on Friday.

In the meeting, a detailed discussion was held regarding the ongoing Indian aggression in Occupied Jammu and Kashmir and the overall law and order situation in the region.

Speaking on the occasion, the foreign minister said that India’s Hindutva ideology and aggressive policies pose serious threats to peace and stability in the entire region.

He said India also wants to sabotage the efforts for establishment of peace in Afghanistan.

Qureshi went on to say that India is targeting the civilian population along the Line of Control to hide its internal weaknesses and grim human rights violations in Indian Occupied Jammu and Kashmir.

“Pakistan has been raising violations of human rights in the held valley by India at every global and regional forum, including the United Nations,” the FM said and urged the international community to take quick notice of the aggressive behavior of India.