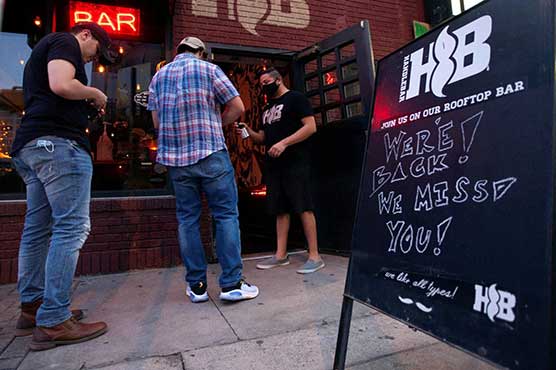 A quick reopening, a surge in infections, and a US recovery at risk

That brief fling with a more fulsome economic reopening, replicated in southern states like Florida and South Carolina, has boomeranged in a resurgence of novel coronavirus cases that is now changing the nature of the pandemic and likely to test the strength of any broader economic rebound.

The reports of widening outbreaks in places like Florida and Texas have noted that it is now younger adults who are getting infected with COVID-19, the respiratory illness caused by the coronavirus. That could temper the death rate since young adults are less likely to die from the disease, but could also upend the country s patchwork economic reopening.

Already fitful, the situation may become murkier as some localities backtrack on reopening plans, stores re-shutter, and Americans sort themselves into those willing to risk more exposure and those still abiding by health guidelines.

It s a recipe, economists and epidemiologists warn, for a muted recovery that could turn recent good news into little more than a head fake. A recent drop in daily deaths may also prove fleeting. Hospitalizations are increasing in Texas, and health experts warn that the spread of the virus among those at lower risk of serious illness, like young adults, will eventually spill over to those more at risk of serious complications.

“There is an inevitable mixing,” said Amesh Adalja, a senior scholar at Johns Hopkins University Center for Health Security. “You will likely see an uptick in deaths.”

And that dynamic could prove poisonous to any economic recovery.

“If you add in the risk-tolerant going maskless to indoor parties, then the virus will be prevalent … and the risk-averse will still be afraid to go back to shopping,” said James Stock, a Harvard University economics professor. “Thus, the recession lengthens and maybe deepens.”

Stock, along with other researchers, has proposed ways to balance reopening the economy with measures to control the spread of the virus. Yet there s little sense of national agreement on any sort of system like that, or what happens if COVID-19 begins to spread more uncontrollably.

Top economists are struggling with what the recent surge in cases might mean.

Does it show, as Evercore ISI Vice Chairman Krishna Guha recently noted, the fragility of the U.S. market if people are scared to cross state lines? Or, as suggested by St. Louis Federal Reserve President James Bullard, are varying judgments about risk and risk management among different people, firms and regions simply how the recovery will proceed to some new balance?

Republican-governed states, particularly in the South, were hesitant to crack down early in the pandemic and were quicker to relax restrictions. They are now seeing record growth in COVID-19 cases, and their residents have been singled out for quarantines imposed by states, including New York, that were hardest hit early in the crisis but have made the most progress in suppressing the virus.

West Virginia Governor Jim Justice, a Republican, has cautioned against travel to Myrtle Beach, after cases in his state were linked to infections at the popular South Carolina resort, and some quick-to-reopen politicians have changed tack.

Within the course of a week, Texas Governor Greg Abbott, a Republican, went from just encouraging people to “stay home” to issuing an edict on Friday that shut down bars, scaled back restaurants capacity, and curbed other activities.

Authorities in Florida also announced on Friday that bars in the state must immediately stop serving alcohol on premises.

Speaking to the Florida Chamber of Commerce on Thursday, Atlanta Fed President Raphael Bostic said if significant numbers of people returned to public life without following health rules, it would put the economy “on a different kind of trajectory.”

“Even though it won t be everyone at once, people might just throw up their hands, say you know what, it is not worth it, ” Bostic said. ” I will just do my take-out. I will do Netflix instead of going to the movies. ”

There have been positive surprises. U.S. employment unexpectedly rose in May and retail sales rebounded sharply from a historic collapse.

But that may prove a false dawn if states where activity was rebounding more quickly prove to have given the pandemic a new foothold.

JPMorgan economist Jesse Edgerton has charted a rough correlation between rising visits to restaurants in some states and growth of infections two weeks later.

“Even if we move into a new normal where young people were willing to go out and spend again, there will be a drag from older people staying home – not traveling, not going to restaurants,” Edgerton said. In addition “we don t know for sure if the people who are going back out and spending now are going to keep doing that.”

“Following a strong first phase of recovery – one in which robust growth data from depressed levels give the false impression of an immediate return to pre-Covid economic dynamism – the economy appears to be entering the slower, second phase,” Daco wrote in a recent analysis. “The foundation to this recovery is an improving health outlook. If that measure continues to deteriorate, confidence will follow suit.”

Petrol price hiked by Rs25.58 per litre with immediate effect