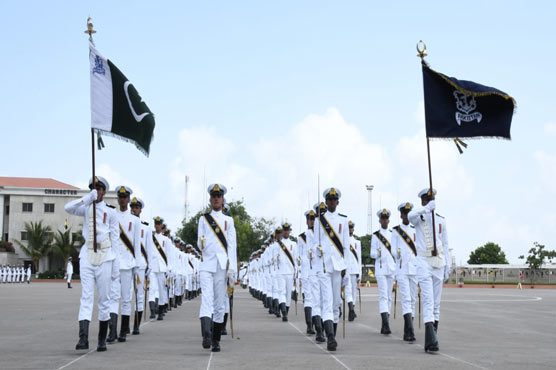 While addressing the parade, the Chief Guest congratulated the newly commissioned officers for proudly joining ranks of maritime defenders of Pakistan.

He advised the officers to remain grateful to Allah almighty for the opportunity being bestowed upon them and remain resolute in taking up the sacred task of defending the motherland. The Chief Guest also asked the young officers to put in their best to live up to the expectations of the nation in line with PN traditions.

The Chief Guest applauded the friendly countries Midshipmen in absentia and also valued modest proceedings due outbreak of pandemic COVID-19.

The Chief Guest briefly mentioned recent acquisitions of platforms by Pakistan Navy and urged the officers to keep themselves abreast with latest technologies in modern warfare and broaden their geo-strategic horizon along with professional competence.

He also acknowledged the efforts and sacrifices of armed forces and pledged made towards safeguarding national sovereignty against any threat posed by the adversary.

While talking on IoK, the Admiral valiantly underlined the unprecedented, unjust unilateral revocation of article 370 and malignant designs of our eastern neighbour.

He further highlighted that humiliation of our adversary on both internal and external fronts has bestowed more responsibility upon Pakistan Armed Forces to respond befittingly, if provoked.

Due to COVID 19 pandemic, the ceremony was attended by limited number of guests.