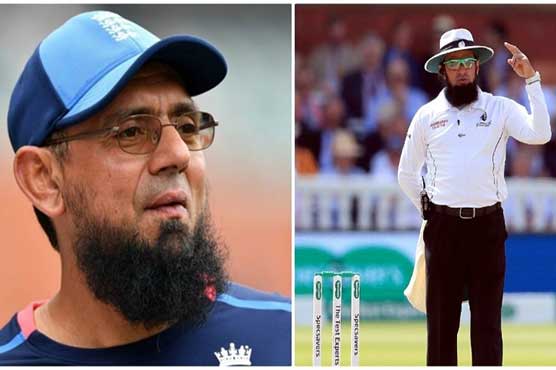 ISLAMABAD (Web Desk) – Former off-spinner Saqlain Mushtaq has asked International Cricket Council (ICC) and Pakistan Cricket Board (PCB) to recognize meritorious services of legendary Pakistan umpire Aleem Dar by honouring him in a way that best suits stature of such a figure.

“I salute him. He is a great legend, who served cricket a lot. He is a great ambassador of cricket and ICC. I feel some stand in a stadium or an umpire room should be named after him. Pakistan [PCB] should think about that.

The 43-year-old, who has recently been appointed as the Head of International Player Development in the High Performance Center of PCB said that Aleem had spent a disciplined life with utmost honesty. “I think he is very much inspirational for all Pakistani umpires and cricketer lovers around the globe.

“In umpiring he has the most international appearances. During my playing days I saw every country trusted him. They wanted him to be their umpire.”
He said as a professional umpire Aleem Dar was a dead honest person, who never favoured any particular player or a team.

“There is hardly any margin in his decisions. There are several instances when his decisions were referred to the third umpire for reviews, but it was very rare that these were not upheld [by the third umpire],” he said of Aleem, whose matchless accuracy astounded everyone during the 2011 Cricket World Cup when all the 15 Umpire Decision Review System appeals against him were struck down.

“I’ve never heard anybody speaking ill of him. I’d been in English team’s dressing room [as a spin bowling consultant in 2016] and whenever there was a talk about the best umpires; Aleem had been at the top of the list. The English players used to say that he is a dead honest man and his decisions are extremely outstanding.”

Saqlain said that he had also heard players of other international teams including Australia, South Africa, India, Sri Lanka and Bangladesh expressing same opinions about Aleem.

He said although, Aleem Dar had won several ‘Umpire of the Year’ awards, he deserved more accolades.