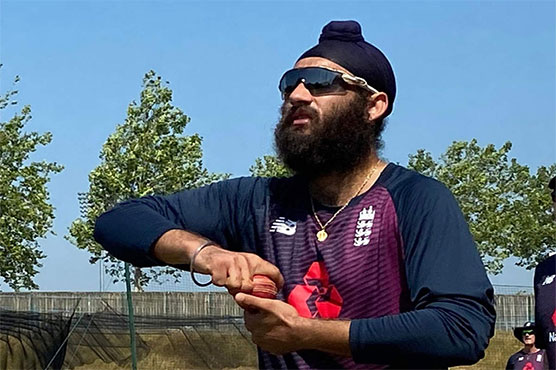 LONDON (AFP) – Amar Virdi wants to follow the example of fellow Sikh spinner Monty Panesar by establishing himself in the England Test side.

Virdi, an uncapped 21-year-old Surrey off-break bowler, has been called into England s 30-man training camp ahead of next month s three Test campaign at home to the West Indies — the first major international cricket series since the global games went into a coronavirus-enforced lockdown.

When Vikram Solanki, a fellow British Asian, was recently appointed as the head coach of Surrey it reopened the debate on whether English cricket was doing enough to attract talent from minority communities.

And Virdi was in no doubt about the importance of role models when asked to name his his childhood cricket heroes.

“Growing up I remember watching Graeme Swann and Monty Panesar bowling and that was very inspirational to me,” said Virdi during a conference call on Friday.

“Obviously with Monty it was because he looks very similar to me as well, especially being from the (Sikh) community that I am.

“We re in a minority in a lot of industries and to see someone progressing and doing well in the field you re in really motivates you and shows you you can do it if they re doing it as well.”

Virdi, who toured Australia with the second-string England Lions in 2019/20, has taken a promising 69 first-class wickets in 23 matches at an average of under 29 apiece.

But unlike many of his privately educated England counterparts, Virdi rose through the ranks despite attending a state school in London that did not play cricket at all.

“It can be very daunting for people from minority communities to be playing cricket just within your community and then moving to a bigger club,” he said.

“For instance, I started at Indian Gymkhana, which is majority Asian, and I found it daunting moving to Sunbury Cricket Club, which I did at about 12 years old.

Virdi, who thanked his parents for their backing, added: “If you re at a private school you re getting that cricket but my school didn t even play cricket so that s another avenue.”

“Obviously my coach from a young age has been Saqlain Mushtaq, who invented the doosra so I m quite lucky to have a top coach there,” said Virdi, more of a conventional bowler.

Pocock played Test cricket in the 1960s, 70s and 80s and Virdi, recalling his time with the Surrey stalwart, said: “He s so enthusiastic and energetic about spin bowling.

“It s almost like you get that feeling you re a kid in a sweetshop.”