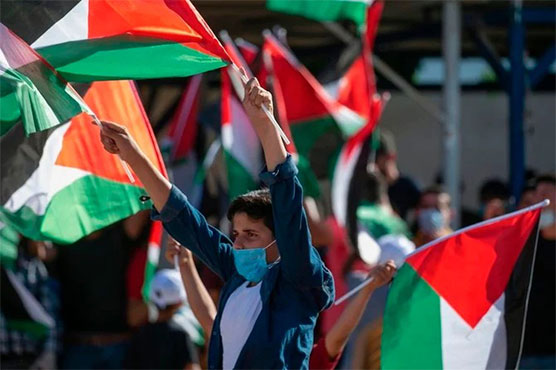 GAZA CITY (AFP) – Hamas has warned that Israeli annexation in the occupied West Bank would be a “declaration of war”, but the Islamist group must weigh the cost of a new fight, analysts say.

The proposals envisage Israel annexing its West Bank settlements and the Jordan Valley, Palestinian territory occupied since 1967 and located around 50 kilometres (31 miles) from the enclave of Gaza.

The Israeli government is expected to decide from July 1 on the implementation of the Trump plan.

As the clock ticks, Hamas, which has fought three wars against the Jewish state since 2007, is seeking to define its strategy in the face of the latest challenge.

“There is no doubt that Hamas options are complex because any response to the annexation will have consequences for the Gaza Strip,” said Palestinian analyst Adnan Abu Amer.

Despite a 2018 truce, Hamas and Israel still trade fire from time to time, with rockets or incendiary balloons launched from Gaza and reprisal strikes by Israel.

“Tensions at the border fence may resume, with the launch of incendiary and explosive devices,” said Mukhaimar Abu Saada, professor of political science at Gaza s Al-Azhar University.

But he ruled out “the option of military activities” against Israel by Hamas, which rules over a territory already impoverished and under a crippling Israeli blockade.

The movement “does not want Gaza to pay the price, and wants to wait to see what is going on, organise popular protests and not have to engage in confrontation with Israel,” he added.

On Friday Israeli air force jets struck Hamas positions in Gaza after rockets were fired from the territory towards Israel for the first time since early May.

The previous day, Hamas s military wing had warned that annexation would prompt a war.

“The resistance considers the decision to annex the West Bank and the Jordan Valley to be a declaration of war on our people,” said spokesman Abu Ubaida.

And an Islamist official told AFP that Hamas was in talks with other factions in the coastal enclave to “coordinate the resistance and resume the return marches “.

On Sunday the deputy head of Hamas s political wing, Khalil al-Hayya, said that “total resistance and armed struggle (were) necessary to face the enemy s plan”, calling for a “Day of Rage” on July 1.

In March 2018, the Palestinians launched weekly protests along Gaza s border with Israel to demand “the right of return” for Palestinians who were chased out or fled from their lands when Israel was created in 1948.

They also demanded the lifting of the strict Israeli blockade imposed over a decade ago on Gaza purportedly to contain Hamas.

If Israel goes ahead with its annexation plan, Hamas may take a “more pragmatic” attitude and perhaps allow other factions to fire rockets at Israel or engage in clashes along the border, said analyst Abu Amer.

But it would do everything to prevent a major response from Israel, he added.

Abu Amer said that Hamas wants armed attacks against Israel in the West Bank instead, in order to spare the Gaza Strip.

But for that, there would need to be a dialogue between Hamas and the rival Fatah party of West Bank-based Palestinian Authority (PA) president Mahmud Abbas.

The two parties have been at loggerheads since the Islamist movement wrested control of the Gaza Strip from the PA in 2007 after a near-civil war, a year after winning parliamentary elections.

Since then, all efforts at inter-Palestinian reconciliation have failed.

“We call on our people to turn this ordeal into an opportunity to get the Palestinian project back on track,” he said.

Abu Amer, however, said an agreement between the PA and Hamas is very slim, even “impossible, because of the lack of confidence” on both sides.