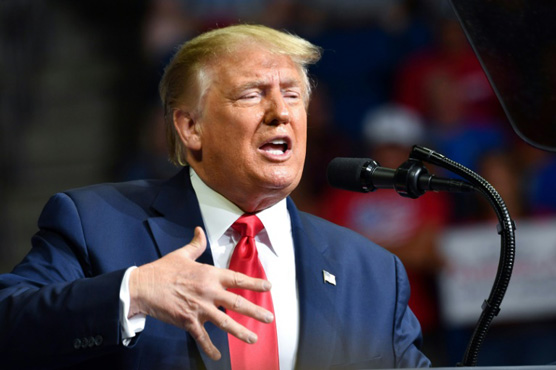 WASHINGTON (AFP) – US President Donald Trump on Sunday shared a video of a stand-off between anti-Trump protesters and his supporters in which a man chants “white power” — before deleting it amid an outcry.

“Thank you to the great people of The Villages,” Trump tweeted above the video clip. “The Radical Left Do Nothing Democrats will Fall in the Fall.”

The footage, apparently shot in a Florida retirement community, shows a man driving a golf-cart bearing “Trump 2020” and “America First” signs, being heckled by a roadside protester chanting “racist.”

As they yell at each other, the driver repeatedly mouths the words “white power” with a raised fist.

“White power! There you go, white power. Did you hear that?” the protester yells back at him.

Trump tweeted the video shortly after 7:30 am. At 11 am it had been removed from his account — and the White House shortly after issued a statement saying the president had not heard the “white power” chant before sharing the footage.

“President Trump is a big fan of The Villages. He did not hear the one statement made on the video,” said White House spokesman Judd Deere.

“What he did see was tremendous enthusiasm from his many supporters.”

Trump has long been accused of fanning racial tensions, including during the nationwide reckoning over racial inequality triggered by the death-in-custody of African American George Floyd a month ago.

Infamously, after deadly violence pitted neo-Nazis against counter-protesters in the Virginia city of Charlottesville in 2017, he declared there to be “very fine people on both sides.”

The “Villages” video triggered an immediate backlash on social media, and Trump allies were pressed to defend it on the Sunday morning talk shows.

The Republican Party’s only black senator, Tim Scott, interviewed on CNN’s “State of the Union,” called the entire video “offensive.”

“We can play politics with it or we can’t. I’m not going to. I think it’s indefensible. We should take it down. That’s what I think.”

Also questioned on CNN, Trump’s Health Secretary Alex Azar claimed he had not seen the footage or Trump’s tweet.

“But obviously neither the president, his administration nor I would do anything to be supportive of white supremacy or anything that would support discrimination of any kind,” Azar said.