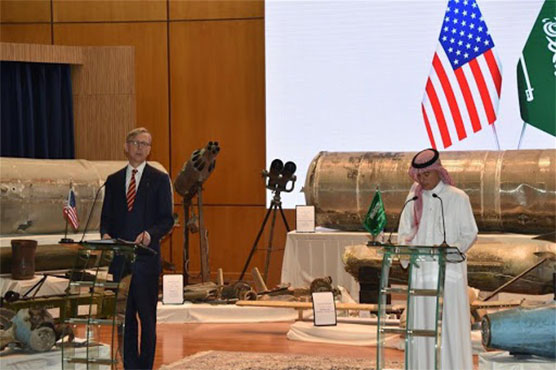 Saudi, US push for extension of Iran arms embargo

RIYADH (AFP) – US and Saudi officials on Monday called for extending a UN arms embargo on Iran, warning of major implications for regional security, accusing Tehran of arming Yemeni rebels.

The embargo, put in place as part of a nuclear accord signed with Tehran in 2015, is set to expire in October but Washington is working to extend the ban as tensions with its arch-rival remain high.

Lifting the ban would “embolden” Tehran and could trigger a regional arms race, US Special Representative for Iran Brian Hook told reporters in Riyadh.

“This is not an outcome that the UN Security Council can accept,” Hook said at a joint news conference with Adel al-Jubeir, the Saudi minister of state for foreign affairs.

At the conference venue, Saudi officials displayed remnants of intercepted missiles and drones they said were supplied by Iran to Yemen s Huthi rebels.

The Huthis have recently targeted Saudi cities, including the capital Riyadh, with a series of missile and drone strikes.

“Iran seeks to provide weapons to terrorist organisations. What will happen if the embargo is lifted?” Jubeir said.

Hook said later in Bahrain that if the arms embargo expired, Iran would be able to acquire advanced arms and pose a greater threat to Gulf security and international shipping.

“It will trigger an arms race in one region that needs it the least,” Hook said on his second leg of the Gulf tour to garner support for extending the arms embargo on Iran.

Allowing the UN arms embargo to expire would be a betrayal of the security council s responsibility of maintaining international peace and security, he said.

The US official also said that the embargo has constrained Iran s ability to freely move weapons to its proxies.

US Secretary of State Mike Pompeo warned last week of a return of UN sanctions on Iran if the Security Council fails to extend an embargo.

France, Britain and Germany, which all still support the nuclear deal, have also said they supported extending the embargo.

No date has been scheduled for a vote on the resolution and it is unlikely to pass, as veto-wielding China and Russia have already spoken out against extending the embargo.

Iran agreed with major world powers in 2015 to freeze its nuclear programme in return for the lifting of punishing international sanctions.

But in 2018, US President Donald Trump pulled the United States out of the agreement and reimposed sanctions, prompting Iran to roll back its own commitments.