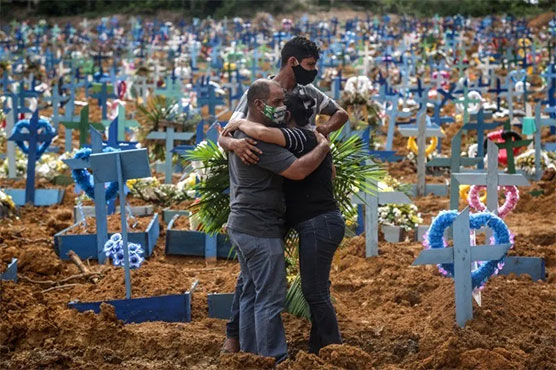 RIO DE JANEIRO (AFP) – Brazil topped 60,000 deaths from the novel coronavirus after recording more than 1,000 fatalities over the last 24 hours, the health ministry said on Wednesday.

The South American country has suffered the largest number of daily deaths globally for the last week, and is the second worst affected nation in the world for both cases and fatalities after the United States.

Brazil is showing no signs of reducing either its number of daily cases or deaths.

With more than 46,000 new cases, the country of 212 million now has 1.44 million people infected, although analysts believe the true figure is much higher.

The largest number of deaths have been in the most populous state, Sao Paulo, with 14,700, followed by Rio de Janeiro, with more than 10,000.

Rio s death rate of 584 per million inhabitants is more than twice the national average of 284.

The northeastern state Ceara has been even worse hit with 673 deaths per million, putting it on a par with the hardest hit countries in the world.

Meanwhile, the novel coronavirus has killed at least 512,383 people since the outbreak emerged in China last December, according to a tally from official sources compiled by AFP at 1900 GMT on Wednesday.

The tallies, using data collected by AFP from national authorities and information from the World Health Organization (WHO), probably reflect only a fraction of the actual number of infections.

Many countries are testing only symptomatic or the most serious cases. The United States is the worst-hit country with 127,681 deaths from 2,658,324 cases. At least 720,631 people have been declared recovered.

The country with the highest number of deaths compared to its population is Belgium with 84 fatalities per 100,000 inhabitants, followed by United Kingdom with 65, Spain 61, Italy 58, and Sweden 53.

As a result of corrections by national authorities or late publication of data, the figures updated over the past 24 hours may not correspond exactly to the previous day s tallies.

US buys up COVID drug, as some countries say well-stocked