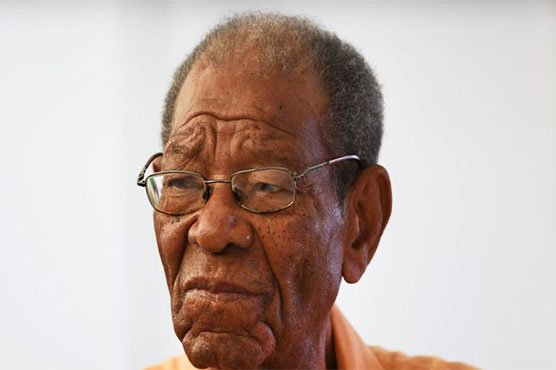 ST. JOHN S (AFP) – Legendary batsman Everton Weekes, the last of the famed West Indies Three Ws , died Wednesday at the age of 95 and was hailed as “a founding father” of the sport in the Caribbean.

“Our hearts are heavy as we mourn the loss of an icon. A legend, our hero, Sir Everton Weekes,” tweeted Cricket West Indies.

“Our condolences go out to his family, friends and many fans around the world. May he rest in peace.”

Walcott died in 2006 while Worrell passed away in 1967. All three had been born within a mile and a half of each other over an 18-month period.

Today, the national stadium in Bridgetown is named the Three Ws Oval.

“A tremendous gentleman and a wonderful human being. He was literally a founding father of our cricket. May he rest in peace.”

Skerritt hailed Weekes “amazing legacy as both a great cricketer and a great human being. He was the last of the famous three Ws to pass to the great beyond.

“I had a personal relationship with Sir Everton, I had the opportunity last year to go to visit him at his home in Barbados when he had come out of hospital after he had had a very serious illness.

“We had a chance to chat about his career. He was a most amazing man and just one of the most humble and decent and wonderful people you could ever meet.”

Weekes, who suffered a heart attack in 2019, made 15 centuries including five in an extraordinary sequence that remains a record today.

Weekes made his mark in the fourth Test against England in Jamaica in 1948 where he crashed an attack that included Gubby Allen, Maurice Tremlett and Jim Laker for 141, leading to a 10-wicket win.

When the West Indies went on to tour India later in the year, he produced successive innings of 128 in Delhi, 194 in Bombay and 162 and 101 in Calcutta.

He ought to have had a sixth consecutive hundred but was run out for 90 in Madras, a decision that Walcott described as “rather doubtful”.

In 1950 he played a key supporting role to spinners Sonny Ramadhin and Alf Valentine in West Indies 3-1 series win in England.

He made three half-centuries and then 129 at Trent Bridge.

Weekes returned to England in 1957 which produced one truly memorable innings.

It came in the second innings at Lord s with the West Indies, still trailing England by 217, on 80-4 and facing a heavy defeat.

The England attack of Fred Trueman, Brian Statham and Trevor Bailey exploited the ridge at the Nursery End to make the ball rear spitefully.

Weekes joined Garry Sobers and set about adding 100 in 95 minutes.

Weekes took a blow to the hand which cracked a finger but in a three-hour stay at the crease, continued to carve the bowlers around Lord s, hitting 16 boundaries before being dismissed for 90.

It was that spirit and stylish devastation which fans remembered on Wednesday.

West Indies Players Association tweeted: “We salute a great West Indies icon; Sir Everton made an invaluable contribution to the sport, his country and the region.

“We were blessed to have him among us, may his soul rest in peace.”

“Everyone at MCC and Lord s are saddened at the news of Sir Everton Weekes passing,” said the MCC.

“He will forever be remembered as one of West Indies cricket s finest cricketers.”

Retired West Indies fast bowler Ian Bishop added: “I had the great privilege of spending time in the company of Sir Everton on several occasions over the past two decades.

“Never once did I leave his presence without feeling a sense of warmth, cheerfulness & having learnt something rich & endearing each time. A truly great human being.”