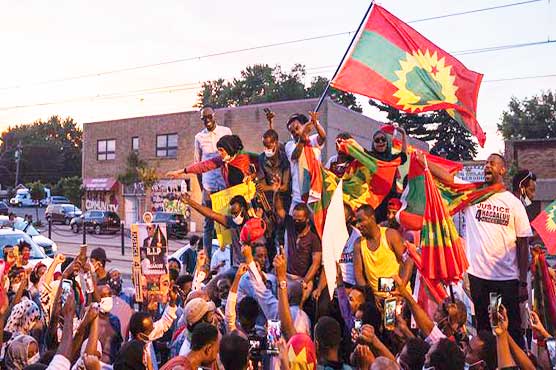 ADDIS ABABA (AFP) – Hundreds of mourners gathered Thursday for the funeral of a popular Ethiopian singer whose assassination this week sparked violence that has left around 90 people dead and highlighted ethnic tensions threatening the country’s democratic transition.

Though beloved by Ethiopians from various backrounds, his music gave voice to Oromos’ widespread sense of economic and political marginalisation during years of antigovernment protests that swept Prime Minister Abiy Ahmed to power in 2018.

The funeral, broadcast live on the Oromia Broadcasting Network, took place in his hometown Ambo, west of the capital.

Officials arranged for his casket to be driven into the stadium in Ambo in a black car, accompanied by a brass band and men on horseback.

“He was a true freedom fighter,” Belay Aqenaw, the funeral’s organiser, said in a speech. “He was a singer who raised our spirits.”

Tensions were high in the city the day before, with some Oromo protesters demanding that Hachalu be buried in Addis Ababa, which many Oromo nationalists contend sits on land that was stolen from them during the creation of modern-day Ethiopia.

At least seven people were shot dead in Ambo on Tuesday by security forces trying to break up the protests, said Bedessa Bikila, a doctor at Ambo General Hospital.

“More than 30 people were treated for gunshot wounds. At Ambo University Hospital there were four deaths, and three at Ambo General Hospital,” Bedessa said.

A total of 81 deaths had been recorded throughout the Oromia region, which surrounds Addis Ababa, as of Tuesday night, according to regional officials.

In addition to deadly force used by police, at least some of the deaths have involved inter-ethnic killings, the officials said Wednesday.

“We have two choices as a people. To fall into the trap being set up by detractors or to deviate from their trap and stay on the course of reforms,” Abiy said.

“Choosing the first is to willingly aid them in our demise.”

The streets of Addis were relatively calm Thursday morning, though traffic was sparse and many shops remained closed.

Officials have not provided casualty figures for the capital, though the US embassy said in a security advisory late Wednesday that eight people had been killed there, including two Ethiopian Federal Police officers.

“Looting of shops and residence areas has worsened”, the advisory said, noting that three banks had been robbed and four fuel service stations burned.

Outside St Paul’s Hospital on Thursday, 24-year-old Fikadu Kebebe, an Oromo, waited to retrieve the body of his younger brother, Getu Kebebe, who he said had been shot by security forces Wednesday.

“He was protesting just to show his emotion over the death of Hachalu. When the police started shooting he tried to run away but he was hit twice in the back and he died on the spot,” Fikadu told AFP.

“The government is targeting the Oromo people in every part of the city. The blame is shifting on us when we are the ones being attacked. Life in Ethiopia is getting more bitter day by day.”

Though Abiy is the country’s first Oromo leader, many Oromo nationalists say he’s been a poor champion of the group’s interests since coming to power.

Two prominent opposition Oromo politicians, Jawar Mohammed and Bekele Gerba, have been arrested in the wake of the latest violence, and some Oromo demonstrators have said they will continue protesting until the men are released.

“They took him from the office. There were soldiers. Still we don’t know where he is,” Geletaw said.

Ethiopia is officially under a state of emergency to fight the coronavirus pandemic, and more than 6,000 cases of COVID-19 have been recorded.

The health ministry said in a statement Wednesday night that the unrest was inhibiting testing.