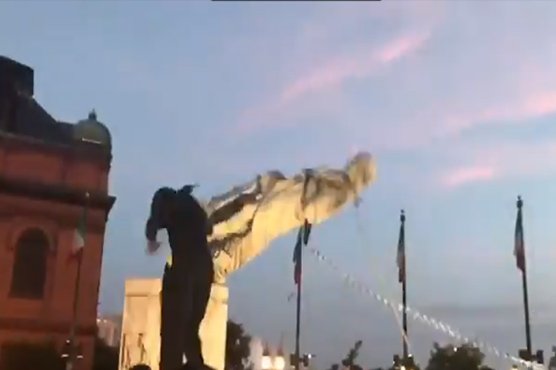 Columbus statue toppled by race protesters in US

WASHINGTON (AFP) – Protesters in the US city of Baltimore pulled down a statue of Christopher Columbus on Saturday, local media reported, the latest monument to be toppled in anti-racism demonstrations.

Statues of figures connected to colonialism and slavery have been ripped from their plinths in the United States and around the world since Black Lives Matter protests were sparked by the killing of George Floyd by a white police officer in Minneapolis in May.

Footage published by the Baltimore Sun showed protesters using ropes to pull down the statue of Columbus — the Italian navigator who reached the Americas in 1492 — near the city’s Little Italy district and rolling it into the Inner Harbor on the night of July 4.

Long hailed as the so-called discoverer of “The New World,” Columbus is considered by many to have spurred years of genocide against indigenous groups in the Americas. He is regularly denounced in a similar way to Civil War generals of the pro-slavery South.

President Donald Trump earlier mentioned the sailor in his speech to mark the July 4 holiday, when Americans typically celebrate their 1776 declaration of independence from Britain.

“Together we will fight for the American dream, and we will defend, protect, and preserve American way of life which began in 1492 when Columbus discovered America,” he said in an address in which he railed against protesters demanding racial justice.

“We are now in the process of defeating the radical left, the anarchists, the agitators, the looters, and the people who, in many instances, have absolutely no clue what they are doing,” he said.

“We will never allow an angry mob to tear down our statues, erase our history, indoctrinate our children.”

A statue of Columbus was taken down in San Francisco last month because the explorer’s actions “do not deserve to be venerated,” city officials said, and another was removed from California’s state capital Sacramento.

Elsewhere, a statue of Belgium’s King Leopold II — who ruled over a brutal regime in Africa — was removed in the port city of Antwerp and a monument to slave trader Edward Colston was ripped down in Bristol in the United Kingdom.

Multan will not be ignored in administrative arrangement of South Punjab: FM Qureshi