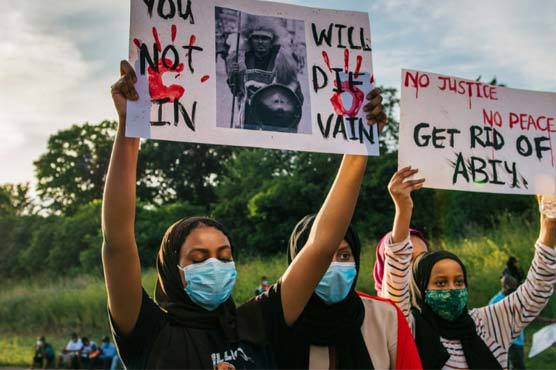 LEGETAFO (AFP) – Firaol Ajema and his friends, dressed in black T-shirts, have been meeting each afternoon in recent days to listen to the music of Ethiopian pop star Hachalu Hundessa.

The homemade shirts bearing the dead singer’s portrait and the slogan “I am also Hachalu” are their way of honouring the man whose murder Monday sparked violence that killed nearly 100 and highlighted Ethiopia’s simmering ethnic tensions.

“We haven’t been able to properly mourn,” said Firaol, a university student in the town of Legetafo outside Addis Ababa, where security has been tight since the killing. “We are suffocating inside our own houses.”

Hachalu’s death, which remains unsolved, was destined to become a political flashpoint.

His music was the soundtrack to anti-government protests that swept Prime Minister Abiy Ahmed, the country’s first Oromo leader, to office in 2018.

Yet, as Ethiopia prepares for elections that will test its democratic transition under Abiy, many Oromo nationalists feel betrayed, arguing the prime minister has failed to champion their interests.

Opposition politicians claim many of the protester deaths were instigated by security forces who have fired on protesters in multiple locations in Addis Ababa and the surrounding Oromia region.

Firaol and his fellow young Oromos in Legetafo agree. “The killing has caused a lot of sadness among us, but the way the government is handling it is even worse,” said Birhanu Gadisa, also a student. “It’s totally unacceptable.”