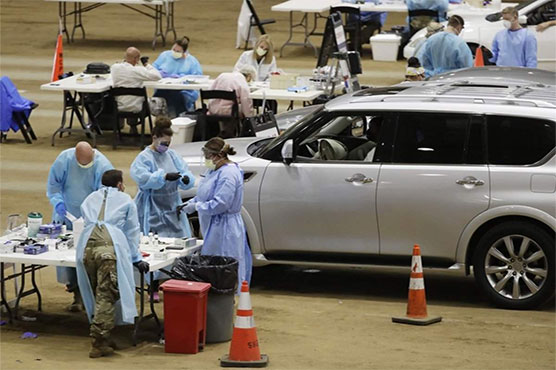 The country, the hardest-hit in the world, had earlier Wednesday passed the grim milestone of three million infections. The actual number is likely far higher due to issues over getting tested in March and April.

US President Donald Trump regularly downplays the numbers, attributing them to an increase in testing capacity during the month of June.

Coronavirus cases are surging in several southern hotspots including Texas, Florida, Louisiana and Arizona, but the pandemic has almost entirely receded from its former epicenter in New York and the north-east.

Several states have been forced to suspend their reopening processes or even reverse course, with some ordering bars to close again.

Wednesday morning, Trump called on schools throughout the country to reopen in the fall, lashing out at his own top health agency to ease health and safety requirements aimed at slowing the spread of the virus, such as social distancing.

The US remains by far the worst affected country, with over 131,000 deaths, while Brazil — whose virus-skeptic President Jair Bolsonaro has tested positive for the disease — is a distant second with close to 67,000 deaths from almost 1.7 million cases.

Despite rising infections, Trump on Wednesday called for students to return to their schools in the fall and lashed the Centers for Disease Control and Prevention for issuing guidance that he said was too restrictive.

The agency s head later said the guidelines were “not requirements” and that the CDC would soon update its advice.

Prestigious universities Harvard and MIT meanwhile sued the administration after it threatened to revoke the visas of foreign students whose entire courses have moved online because of the coronavirus pandemic.

The virus has infected almost 12 million people worldwide and killed more than 500,000 since it emerged in China late last year.

Across the world, citizens chafed under renewed restrictions as countries experience fresh waves of disease.

The Serbian capital Belgrade was hit by clashes for a second night as police skirmished with protesters outraged over the government s handling of the pandemic.

Clouds of tear gas and smoke filled the city center in chaotic scenes that mirrored violence the night before, when thousands came out to protest the return of a round-the-clock weekend lockdown.

In the Australian city of Melbourne, millions were preparing for a return to lockdown to fight an upsurge that is seeing more than 100 new cases reported each day, with panic buyers stripping supermarket shelves.

France, which had flattened its curve by imposing a strict lockdown earlier in the pandemic, said Wednesday it was girding for a possible surge in cases.

But, mindful of potentially disastrous consequences of attempting to thrust millions back into their homes, France s new prime minister aimed to soothe fears by promising no new full shutdown.

“We re not going to impose a lockdown like the one we did last March, because we ve learned… that the economic and human consequences from a total lockdown are disastrous,” Jean Castex said, promising “targeted” measures instead.

Several US states have likewise had to roll back their reopening measures, and on Wednesday the Republican party of Texas announced it was canceling its convention to stem the spread.

Having just a handful of cases at the start of February, the US infection rate passed the one million milestone on April 28 and hit two million on June 11, according to an AFP tally of official sources.

All the while, the death toll has been creeping up to its current figure of more than 132,000, almost one-quarter of the global total.

The US death rate is however substantially lower than it was in late spring.

This is possibly because of a lag between infection and deaths among sick patients, but also because the country s epidemic is affecting younger people, and because better treatments are now available.

Doctors have found that placing patients with breathing troubles on their stomachs eases the burden on their lungs, and are using blood thinners preventatively to stop catastrophic clots from forming as a result of the virus.

They are also using the steroid dexamethasone to stop a supercharged and destructive immune response, and the antiviral remdesivir to help ventilated patients recover faster.

Trump, for his part, has sought to blame China and the World Health Organization for his country s epidemic, and on Tuesday formally began the process of withdrawing from the body.

His opponent in the November election, former Vice President Joe Biden, has vowed to undo the decision if he wins.

The virus continues to take a massive economic toll, sparking an explosion in Canada s federal budget deficit, which hit CAN $343 billion (US $254 billion) for the current fiscal year.

It is equal to 15.9 percent of the Group of Seven nation s gross domestic product (GDP).

The European Union meanwhile is working on a $843 million package to help crisis-hit economies in the bloc.