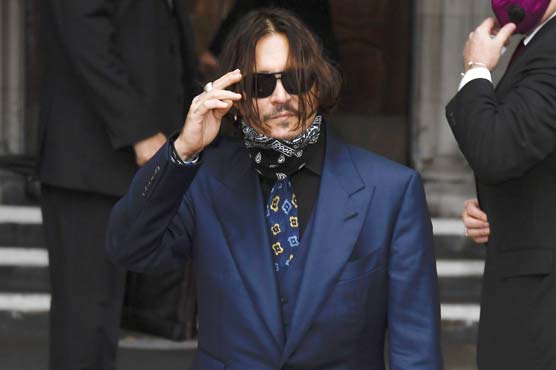 LONDON (Reuters) – Hollywood star Johnny Depp wrote on a wall with blood from his severed finger tip during a long and violent confrontation with his ex-wife Amber Heard five years ago, London’s High Court heard on Thursday at his libel case against a British tabloid.

Depp told the court he suffered “some species of nervous breakdown” during a row with actress Heard, but denied he had violently attacked her and accused her of cutting his finger by throwing a bottle at him.

The revelations came on the third day of Depp’s appearance in the witness stand as he sues the publisher of Britain’s Sun tabloid, News Group Newspapers, over an article in which it labelled the actor a “wife beater”.

The court heard that Depp was in Australia in March 2015 to film “Pirates of the Caribbean” a month after the couple married. Heard had flown to join him from London, where she had been making a movie with co-star Billy Bob Thornton.

The Sun’s lawyer Sasha Wass said Heard suffered a three-day ordeal at Depp’s hands in the rented house where the actor was staying after she became angry at him because he had been drinking to excess and taking drugs.

Consumed with jealousy about Heard and Thornton, Depp attacked her, constantly swigging from a bottle, Wass said.
He slapped Heard across the face, pushed her against the fridge and smashed her head against it, and she barricaded herself in her bedroom to escape him, the court was told.

Wass said at one stage Depp spat in her face, grabbed her by the throat and told her it would be easy to crush her neck.
“Fabricated and vicious,” Depp replied, rejecting all the accusations which he says form part of a hoax by his ex-wife.

He agreed the couple had a violent row on the final day that began because he wanted Heard to sign a post-nuptial agreement, and he had not been drinking until that point.

Depp described the Australian incident as the end of the marriage, after which it was only going to get worse.

Depp said Heard threw two vodka bottles at him, the second of which “severed my finger and crushed my bones”.

“That is when I began what I feel was perhaps some species of a nervous breakdown,” he told the court. “I couldn’t live, didn’t want to live.”

He said he began to write messages on the wall in blood using his severed finger, before then using paint. One message on a mirror said: “Starring Billy Bob, Easy Amber”.

He agreed he might have ripped a telephone off the wall and smashed it and told Heard that she had ruined his life.

Wass told the court the house was a scene of “carnage” with paint everywhere and windows and the television smashed. It caused $75,000 of damage, according to Depp’s assistant.

Earlier Depp denied attacking Heard while undergoing detox to ease himself off prescription drugs on his private island in the Bahamas in August 2014.

Depp told the court it was the “lowest point of my life”, when he was in a great deal of pain, suffering uncontrollable spasms and sobbing like a child on the floor.

He accused Heard of withholding medication that would ease the process, calling it “one of the cruellest things that she has ever done”, the court was told.

However, Wass said Heard, 34, was following instructions from Depp’s medical team and pointed out she had contacted a nurse who was staying on the island to say he was screaming and had pushed her.

“I did not push Miss Heard or attack her in any way,” Depp said. “I was not in a condition to do so in any case.”

Depp has told the court that the abuse allegations were a hoax, and Heard appeared to have been building a dossier as an insurance policy. The trial is due to last three weeks.