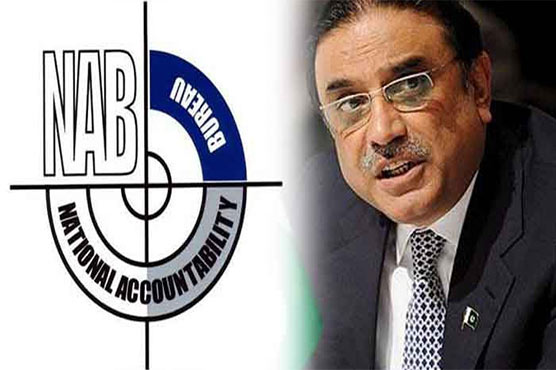 NAB prepares another inquiry against Zardari, requests court to freeze his Clifton house

The anti-graft watchdog’s representative claimed that Zardari had constructed his house in Karachi’s Clifton with corruption as Rs15 crore for this residence was paid from the bank account of PPP leader’s stenographer Mushtaq.

Zardari has failed to provide proof of paying money for his Clifton house by himself, NAB told.

The bureau’s official said that stenographer Mushtaq had accompanied former president on 104 foreign visits. Zardari has not given satisfactory answers of questionnaire regarding his Clifton’s residence, NAB said.

The representative of anti-corruption bureau further told that Mushtaq escaped when he was approached for interrogation.

Moreover, NAB has requested the court to freeze Zardari’s Clifton house till completion of inquiry against him.

In December 2019, former president Asif Ali Zardari was released on medical grounds after an accountability court in Islamabad issued separate robkars [mandamuses] in the Park Lane Estate Company and the money laundering through fake bank accounts cases against him.

The charges in the latest case centre around allegations Zardari laundered vast sums of money through suspect bank accounts and companies.

NAB is conducting investigations in pursuance of the Supreme Court’s verdict in the money laundering of billions through fake accounts case wherein it forwarded the joint investigation team (JIT) report with directions to investigate and file references.

Zardari has repeatedly dismissed allegations he had a hand in the scheme. Never popular and always shrouded in controversy, Zardari — who was once jailed for 11 years for corruption — stepped down from the president s office in 2013. But he has continued to serve as co-chairman of the opposition PPP.