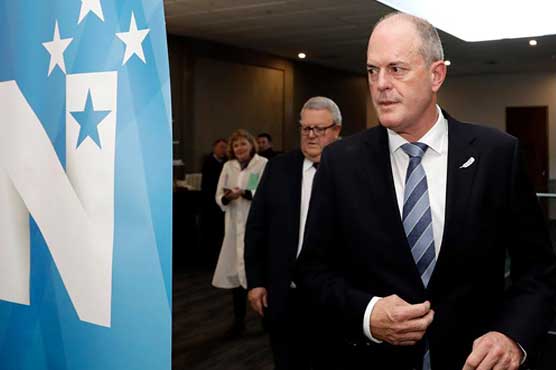 In a brief early-morning statement, Todd Muller announced his immediate resignation as leader of the centre-right National Party, saying “I am not the best person” for the position.

“It is more important than ever that the New Zealand National Party has a leader who is comfortable in the role,” he said.

Muller ousted his predecessor Simon Bridges in late May but failed to reverse polls showing strong backing for Ardern ahead of the September 19 election.

“The role has taken a heavy toll on me personally, and on my family, and this has become untenable from a health perspective,” the 51-year-old said.

Muller did not detail the health issues but several local media outlets reported that he was unable to join an emergency teleconference called early Tuesday to announce his departure to fellow Nationals and it went ahead without him.

Ardern passed on her best wishes to Muller and his family.

“No matter what side of parliament you’re sitting, politics is a difficult place,” she said.

“Our thoughts are very much with Todd and his family at this difficult time as is our compassion and love for Todd,” the party’s senior whip Barbara Kuriger said.

Muller faced a thankless task confronting Ardern, who has won widespread praise for a COVID-19 response that has limited New Zealand to just 22 deaths in a population of five million.

He clawed back some support for the National party, taking it to 38 percent against 50 for Ardern’s Labour in opinion polls, but still trailed 13 percent to 54 in the preferred prime minister rating.

Muller was highly critical of Ardern when personal details of active COVID-19 cases were sent to the media, but the attack backfired when it emerged last week that the leak came from a member of his own party.

Muller said he would now “take some time out of the spotlight” with family but intended to remain in parliament.

His deputy Nikki Kaye is seen as a possible successor, along with the more conservative Judith Collins.

Former Air New Zealand chief executive Christopher Luxon, who is standing for a parliamentary seat in the September election, is also a potential replacement in the longer term.

3800 passenger cars sold in May despite lockdown