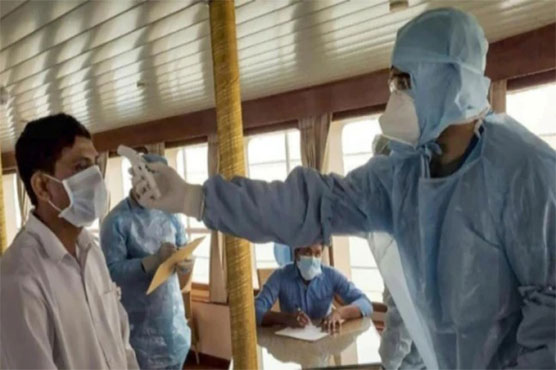 WASHINGTON (AFP) – Coronavirus infections were surging across the globe on Wednesday, forcing several countries to put the brakes on reopening or imposing new restrictions on their weary populations.

The number of COVID-19 cases worldwide topped 13.4 million and more than 579,000 deaths have been reported since the virus emerged late last year in China.

With the situation predicted to worsen in the United States, Walmart, the world s largest retailer, said it would require customers to wear masks at all its stores to help stop the virus spreading.

Venezuela, four days after announcing a loosening of restrictions, became the latest country to reimpose localized lockdown measures, including a “radical quarantine” in the capital Caracas, while Bolivia s La Paz department said it would undergo a four-day total quarantine.

Brazil accounted for roughly half of Latin America s deaths, with more than 1,200 new fatalities recorded Wednesday bringing the total toll since the outbreak began there to 75,366.

In Ireland, Prime Minister Micheal Martin delayed the end of the lockdown because of a surge in new cases.

Ireland had been set to enter the fourth and final stage of relaxing restrictions on Monday, which would have allowed pubs that do not serve food to reopen.

The current restrictions will remain in place until August 10 and the government will also mandate the wearing of facemasks in shops.

Tens of thousands of cases are being reported every day in the United States, which has the world s highest death toll at more than 136,000, and officials are scrambling to roll back reopenings meant to revive economies.

The latest research models show the number of US deaths projected to rise to over 150,000 by next month.

“When you look at the numbers, obviously, we ve got to do better,” said Anthony Fauci, the top US infectious disease expert.

“We ve got to almost reset this and say, Okay, let s stop this nonsense,” Fauci told The Atlantic.

In the US state of Oklahoma, the Republican governor, Kevin Stitt, said he had tested positive for COVID-19.

Stitt, 47, who has often declined to wear a mask at meetings and attended an indoors campaign rally by President Donald Trump in the western state last month, said it was unlikely he contracted the virus there.

The use of facemasks to slow the spread of the virus has become a political flashpoint in the US, where Trump had resisted wearing one until recently and at times mocked the trend.

Walmart said it will require shoppers at its more than 5,300 stores to wear masks starting on July 20, joining a growing group of US businesses in mandating the protection as coronavirus cases have spiked.

“While we re certainly not the first business to require face coverings, we know this is a simple step everyone can take for their safety and the safety of others in our facilities,” Walmart s US chief operating officer Dacona Smith said.

Amid the grim forecasts, American biotech firm Moderna said it would start the final stage of human trials for its vaccine candidate on July 27, after promising results from earlier testing.

Moderna is considered to be in a leading position in the global race to find a vaccine, and while its study should run until October 2022, preliminary results should be available long before then.

In the Asia-Pacific region, where several countries had been somewhat successful in fighting the pandemic, there was fresh evidence of the deadly threat still posed by the virus.

Hong Kong s bars, gyms, and beauty salons closed again Wednesday and a ban on gatherings of more than four people came into force as the city battled a fresh outbreak after months of success against COVID-19.

Most of the city s residents voluntarily adopted facemasks as a barrier against the virus when it was first detected in mainland China, but the Hong Kong government now requires passengers on public transport to wear them or risk a US$650 fine.

There was alarm in Japan too, where Tokyo s governor warned that the capital was on its highest virus alert level after a spike in infections.

That came after the Indian state of Bihar, with a population of around 125 million, announced a 15-day virus lockdown starting Thursday.

Authorities in Australia, meanwhile, pleaded Wednesday with the public to heed social distancing guidelines, with roughly five million people in Melbourne in lockdown since last week in a bid to contain a new outbreak.

“A particular concern for us is the ongoing parties and gatherings,” said Rick Nugent, acting assistant commissioner of Victoria state. “Please stop.”

Face masks will also become compulsory in England s shops and supermarkets from next week, while in South Africa, where the number of cases topped 300,000, a nationwide curfew was reimposed.

Coronavirus cases and fatalities continue to rise across US