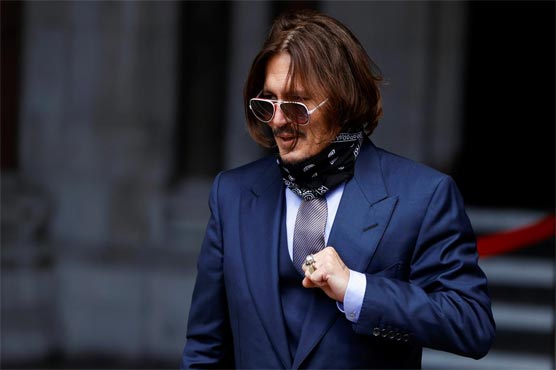 Depp, 57, is suing the publisher of that newspaper for libel over the article, saying he had never struck his ex-wife Amber Heard, and it was Heard that hit him during their volatile relationship.

The paper argues its story is true and its lawyers have told London’s High Court that Heard accuses her ex-husband of attacking her on at least 14 occasions between 2013 and 2016 when he was enraged after drinking or taking drugs.

Kendall was quoted in the Sun’s original article as saying: “I don’t stand behind hitting people or abusing people. It seems that Amber got hurt.”

But Kendall said in a written statement to the court she had been misquoted by the tabloid. She said she had texted the Sun reporter after the article was printed and told her: “It seems that the whole article was about defaming him.”

The Sun article had mentioned Kendall’s advocacy for the #MeToo movement against sexual harassment and assault, and her accusations that disgraced movie producer Harvey Weinstein sexually harassed her.

“Although it was true that I was a victim of Harvey Weinstein, the rest was a lie,” she said in her witness statement.

“I was not ‘going public’, on behalf of #MeToo or myself, to criticize JK Rowling’s decision to cast Mr Depp, nor did I accuse Mr Depp of hurting Amber Heard, about which I have no first-hand knowledge.”

Kendall, who appeared by videolink from Los Angeles, was not questioned about her statement.

She was the last witness called as part of Depp’s case which has spanned nine days.

Heard is due to start giving evidence on Monday when the paper begins its defence.

DEPP’S FRIEND SAYS HEARD “LIKES TO HIT”
Before Kendall’s appearance, a friend of Amber Heard said one of Depp’s lawyers had pressured her to say unfavourable things about Heard in a U.S. court declaration.

In her written statement, interior designer Laura Divenere stated she had not seen any injury to Heard in the days after Heard alleges Depp threw a phone which struck her face.

Asked by Sasha Wass, lawyer for the Sun’s publisher News Group Newspapers, if she had come under “enormous pressure” to make the declaration, Divenere said: “Correct”.

Earlier the court heard from Depp’s long-time friend, artist Isaac Baruch, who said a “distraught” Depp had come to see him in 2013, and told him Heard “likes to hit”, and that she would punch him after starting fights.

Baruch, who lived in one of the Los Angeles penthouses owned by Depp, also said Heard had no visible injuries in the days after she alleges that Depp threw a mobile phone during a heated argument in May 2016.

In other testimony on Friday, Travis McGivern, one of Depp’s security guards, said he saw Heard throw a full can of Red Bull drink at Depp, spit down at him from a landing and punch him in the eye during another argument in March 2015.

Depp and Heard met while making “The Rum Diary” in 2011 and married in February 2015. Heard filed for divorce 15 months later.