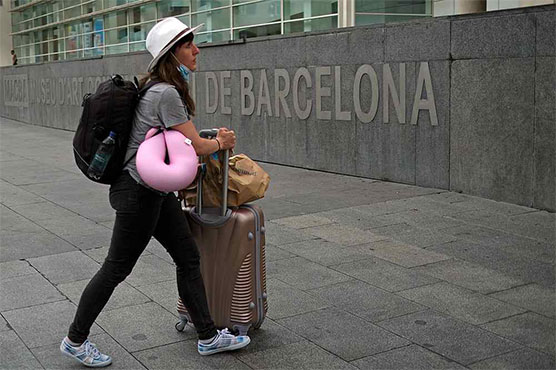 BARCELONA (AFP) – Four million residents of Spain s second city Barcelona were told to stay at home Friday, as virus cases rise, while EU leaders met in Brussels seeking to rescue Europe s economy from the ravages of the pandemic.

“We must take a step back to avoid returning in coming weeks to a total lockdown of the population,” Catalan regional government spokeswoman Meritxell Budo said.

Spain s COVID-19 death toll of 28,400 is one of Europe s worst and the country has identified more than 150 new virus clusters across the country.

Barcelona, one of Europe s most visited cities, issued its plea as EU leaders met fand as India became the third country to record one million cases after the United States and Brazil.

The virus has now killed more than 590,000 people and infected over 13,800,000 as it continues to surge across the globe despite months of unprecedented lockdowns to stop its spread.

A growing number of countries and cities have been forced into reimposing restrictions, with Barcelona only the latest example.

India hit the million mark the day after Brazil s number of virus cases topped two million — although the World Health Organization said Friday that Brazil s contagion has “plateaued” with the rate of infection stabilising after 77,000 deaths.

The mood was sombre in Brussels as European Union leaders met in person ls for the first time in five months, hoping to overcome divisions about a planned 750-billion-euro ($855 billion) stimulus package.

“It s our European project which is in play here,” French President Emmanuel Macron warned before meeting Dutch Prime Minister Mark Rutte, who leads a group of northern European countries holding out against handing cash to southern nations without strict conditions.

The Group of 20 in April agreed to a one-year moratorium to help the world s 76 most vulnerable economies but Reinhart said this step, though “useful”, hasn t “gone as far as it was hoped.”

The International Monetary Fund warned meanwhile that the United States, with more than 3,560,000 cases, must do more to support households and boost demand after GDP contracted 37 percent in the second quarter.

“The sooner we put this down, the sooner we re going to get back to normal and you ll be able to freely have fun, go to the bars go with the crowds, but not now. Now is not the time to do that,” he said.

Lockdowns have been imposed on millions of people in India, where more than 600 are dying every day.

India s main hotspots had previously been the megacities of Mumbai and New Delhi, but smaller cities and rural areas — where 70 percent of Indians live — have recently begun to raise the alarm.

With per capita spending on health care among the lowest in the world, India s hospitals are reeling.

“The fear of catching the infection is very real as I am in a high-risk zone almost round the clock,” Showkat Nazir Wani, a doctor in an intensive care unit at Sharda Hospital just outside the capital New Delhi, told AFP.

“It s not going to go away till a vaccine comes… I have to keep fighting and trying to save every single life.”

The three governments pointed the finger at the Kremlin, saying that the hacking group involved was “almost certainly” linked to Russian intelligence.

Moscow rejected the accusations as “groundless”.

In the US, the state of Florida has become the country s new epicentre as well as a key battleground in a partisan-tinged national fight over reopening schools.

Despite fears of a second wave, British Prime Minister Boris Johnson said his country could expect to return to “significant normality” by Christmas, as a study revealed that Europe s hardest-hit nation may be overestimating its death toll.

However, Israel said stores, markets and other public spaces would be closed on weekends as its number of cases surges.

In China — where COVID-19 first emerged late last year — flights were curtailed and public transport shut down in Urumqi, the capital of the far-western Xinjiang region, after new infections were detected.

Authorities in Australia s second-biggest city Melbourne meanwhile warned that its lockdown could become even tougher after a record 423 new cases were registered there on Friday.