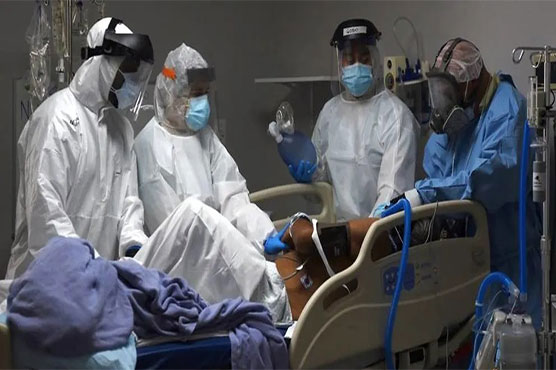 WASHINGTON (AFP) – The United States marked a record number of coronavirus cases Friday for the third consecutive day, notching 77,638 new infections in 24 hours, according to a tally by Johns Hopkins University.

The country also recorded 927 deaths in one day, according to the count by the Baltimore-based university at 8:30 pm (00:30 GMT Saturday).

The country, the hardest-hit by the coronavirus in the world in absolute terms, has suffered 139,128 total fatalities out of 3.64 million confirmed cases.

Experts believe the United States never emerged from its first wave of infections, and cases have been surging again in recent weeks, particularly across the south and west in states that pushed to lift lockdown restrictions early.

“Without aggressive action on the part of every person, we will not get back to slowing the spread,” Barbara Ferrer, the county public health director, said in a statement.

In Texas and Arizona, which are dealing with stark surges in virus cases and deaths, authorities are bringing in refrigerated trucks to cope with the body count.

– In virus-hit Texas and Arizona, refrigerated trucks to store dead –

When the coronavirus outbreak first escalated in the United States earlier this year, New York was forced to use refrigerated trucks to handle the overwhelming body count.

Now, as the Sun Belt copes with a stark uptick in virus cases and deaths, Texas and Arizona are doing the same thing to ease the burden on their near-capacity morgues.

Earlier this week, Texas topped its daily virus death toll record with 129 fatalities. So far, more than 3,700 people in the state have lost their lives to COVID-19.

In cities like San Antonio and Corpus Christi, authorities monitoring the spiraling caseload are ordering freezer trucks and trailers as they brace for the worst.

“There s nowhere to put them. It sounds terrible but it s true,” San Antonio Mayor Ron Nirenberg said this week of the victims.

“We do have refrigerated trucks on standby in the area, should they be needed.”

Ken Davis, the chief medical officer for the Christus Santa Rosa health system operating in that area, said: “In the hospital, there are only so many places to put the bodies.”

In the southwestern state of Arizona, more than 2,500 deaths linked to the novel coronavirus have been reported.

In Maricopa County, home to the state s capital and biggest city Phoenix, authorities ordered 14 refrigerated trucks on Thursday, with a capacity to hold up to 294 bodies.

The United States is by far the nation hardest hit by the global pandemic. More than 138,000 people have died, according to a tally by Johns Hopkins University.

The United States COVID-19 epidemic is once more blowing up at an exponential rate, even as leaders of some of the worst-hit states resist mandatory mask measures to stem the spread.

Health authorities reported 78,000 new cases on Thursday, according to the database run by Johns Hopkins University.

The number of patients hospitalized for the virus is at its highest level since April 23, according to The COVID Tracking Project.

The death rate, which plummeted in May and June, has been rising since last week. Florida, the new epicenter, posted more than 11,000 new cases and 128 deaths on Friday.

Coronavirus is meanwhile spreading to new parts of the country including Idaho, Tennessee and Mississippi.

But New York, the original US epicenter where more than 32,000 virus patients have died, moved to further ease its restrictions after bringing its outbreak under control.

President Donald Trump s ratings have plummeted since the start of the pandemic.

Only 38 percent of Americans approve of his handling of the crisis, against 51 percent in March, according to a Washington Post poll published Friday.

Trump aide Kellyanne Conway said Friday the cause for the decline is because the president has stopped giving daily briefings on the virus.

“The president s numbers were much higher when he was out there briefing everybody on a day-by-day basis about the coronavirus,” she said, adding: “I think the president should be doing that.”

The task force briefings featuring Trump were halted in late April amid mounting criticism over his exaggerated and inaccurate claims about the public health response and his penchant for pushing bogus treatments.

“Not necessarily lock down again, but say, We ve got to do this in a more measured way, ” he added.

Subsequently, many have been forced to pause re-opening, re-closing bars but also sometimes gyms, movie theaters, places of worship and shops.

“While we all agree wearing a mask is effective, I am confident Georgians do not need a mandate to do the right thing,” Kemp said.

His lawsuit seeks to overturn not just the mask order but Mayor Keisha Lance Bottoms return to a stricter lockdown.

Bottoms, a Democrat who has herself tested positive for coronavirus, believes Kemp s decision was political retaliation, telling CNN the suit came one day after Trump visited Atlanta when she pointed out he was breaking the law by being maskless at the airport.

In Texas, Governor Greg Abbott finally ordered a statewide mask order after seeing cases surge, but he has been condemned through censure resolutions passed by multiple local Republican officials.

They accuse him of violating the party s principles of separation of powers, free enterprise and personal responsibility, according to The Texas Tribune.

The Democratic mayor of Houston, the state s largest city, wants to move back into lockdown but the governor refuses.

Many sheriffs — who are often elected officials — in California, North Carolina and elsewhere have said they won t enforce mask regulations in their counties.

“Do not be a sheep,” a sheriff in the state of Washington said in late June. The US epidemic began in the western state and cases there have started to pick up once again.