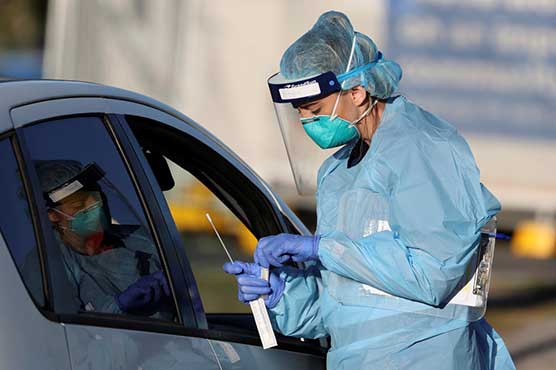 Most of the cases were reported in Victoria state, where authorities have struggled to bring an outbreak in Melbourne under control despite Australia’s second-biggest city being locked down for nearly two weeks.

Australia’s new coronavirus infections previously peaked on March 28 when 459 cases were reported, according to data compiled by AFP, before the country appeared to bring the virus under control and began easing harsh restrictions.

Australia, like neighbouring New Zealand, has been lauded for its pandemic response.

Australia has now recorded almost 13,000 cases of COVID-19 and 128 fatalities in a country of about 25 million.

Melbourne residents will be required to wear masks outside from midnight — making the city the first place in Australia to mandate face coverings in public — in a new effort to slow the virus spread.

But Andrews said “further behaviour change” would still be required, after analysis showed almost nine in 10 people diagnosed with coronavirus over the two weeks to Tuesday did not self-isolate between feeling sick and seeking a coronavirus test.

The outbreak has left Australia rattled and dampened hopes of a speedy economic recovery.

An inquiry into how the virus spread in Melbourne heard this week that many cases were likely linked to infection control breaches at hotels used to quarantine residents returning from overseas.

Victoria has effectively been sealed off from the rest of the country in an effort to contain the virus, but new cases have been detected in neighbouring New South Wales state.

New South Wales Premier Gladys Berejiklian described the coming weeks as “the most critical” since the height of the last lockdown, when the state held the mantle of Australia’s hardest-hit region.

Some states and territories were due to report daily figures later Wednesday but new community outbreaks have not been detected in less-populated regions for weeks.