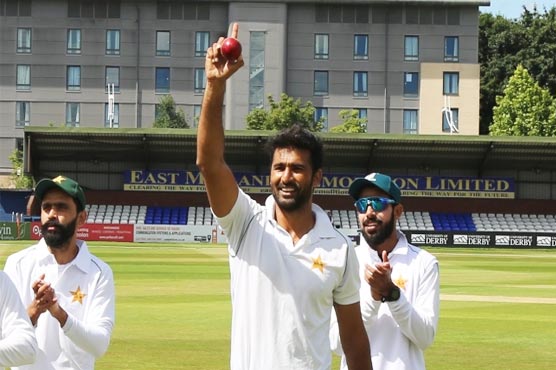 On the third day of the practice match between Azhar Ali’s Team Green and Babar Azam’s Team White, the 36-year-old returned figures of five for 50 in 20.1 overs which saw the former fold for 181 in the first innings before they staged a comeback on the final day to win the match by six wickets.

Prior to the practice match, Sohail had a conversation with bowling coach Waqar Younis on the art of late swing. Sohail shared how the presence of the bowling legend in the support staff helped him gear up for the four-day match.

“The conditions in England are swing conducive so every fast bowler gets the ball to move,” Sohail told pcb.com.pk. “I asked Waqar bhai to teach me how to swing the ball late. It took him only two minutes to explain it to me. It is because of his tips that I took five wickets in the first innings.

“I am eager to learn from Waqar bhai. I follow him wherever he goes and speak to him about the art of bowling as he has abundance of knowledge to share. A few days back I was struggling with something while bowling, I thought of reaching out to him and even before I spoke to him about it, he said he knew what I wanted to talk to him about and he explained it to me in a minute.”

On Pakistan’s historic tour of England in 2016, Sohail played a crucial role in helping Pakistan secure a 2-2 Test series draw by returning two five-wicket hauls in as many matches. In total, he picked up 13 wickets at 25 apiece and finished as the third best wicket-taker.

In such a backdrop, the English side will be wary of his Sohail’s presence. The fast bowler last played a Test in December 2016 and expressed his delight on his inclusion in the squad for this tour.

“Definitely, it is an honour for me to return to the side. I had taken two five-fers here against England in 2016 and now in the practice match I have started off with five wickets so I am feeling very good. We had been at our homes for the past four months due to coronavirus so starting off on a high feels nice.”

Prior to Sohail’s five wickets, 17-year-old Naseem Shah made a big impact when he took five wickets for Team Green. The strength of Pakistan’s pace attack was further established as Mohammad Abbas and Shaheen Shah Afridi picked up three wickets each providing valuable support to Naseem and Sohail respectively.

Naseem and Shaheen finished the match with six and four wickets respectively.

Shedding light on the youngsters’ performances, Sohail said: “It gives me immense pleasure to see Naseem Shah. He bowls consistently at 150kph. Just like him, Shaheen Shah Afridi is another good bowler. I like both of them.

“It gave me great happiness to see Naseem pick five wickets in the first innings. He is in rhythm and is looking great. What is astonishing is that he is playing in these conditions for the first time but still he is doing so well. Shaheen has also been phenomenal.”