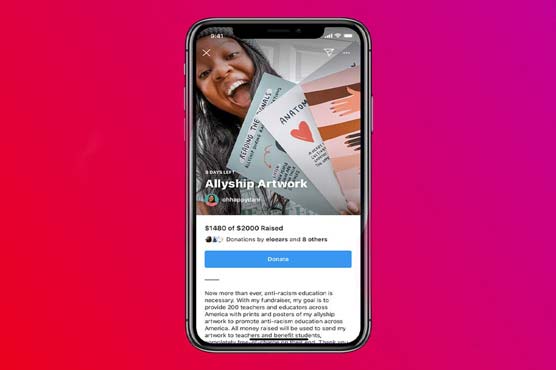 (Web Desk) – Instagram has launched a feature for users in the UK, US, and Ireland to raise money from their followers.
The feature is called “Personal Fundraisers”, and money can be sent through a new “donation sticker”

“Stickers” are dynamic graphics that can be put on image and video stories. Previous stickers include location information and polls, which are used to get more engagement from a users’ Instagram audience.

Any user in the US, UK, and Ireland is eligible to ask for donations and donate themselves, as long as they are over the age of 18.

The test is starting on Android devices, and will be coming to iPhone users later.

Fundraisers last for 30 days and can be extended in 30-day intervals. At the end of the process, the money is moved into a designated bank account.

Information from those who have chosen to donate remains hidden to the public, but the recipient will see their username, the name on their profile, and the amount they have donated.

The Facebook-owned company says Personal Fundraisers will be easier to share in the Feed and Stories over time.

“Since January, people have raised more than $US 100 million for COVID-19 fundraisers globally across Instagram and Facebook. In the last 30 days, donations on Instagram have doubled in the US,” Instagram said in its announcement.

“Now, we’re making it easier to create fundraisers directly on Instagram that benefit such personal causes.”

To create a Personal Fundraiser, hit “Edit Profile,” then “Add Fundraiser” and then “Raise Money.”

Users will then have to choose a photo, select a fundraiser category (which includes crisis relief, education, medical, personal emergency, and volunteering) and add details.

Instagram, owned by Facebook, says it will vet all fundraisers for approval. Qualities that could get a fundraiser unapproved include benefiting a political campaign, lotteries, breaching local laws, and breaching Facebook’s Community Standards or the Fundraiser Terms of Service.