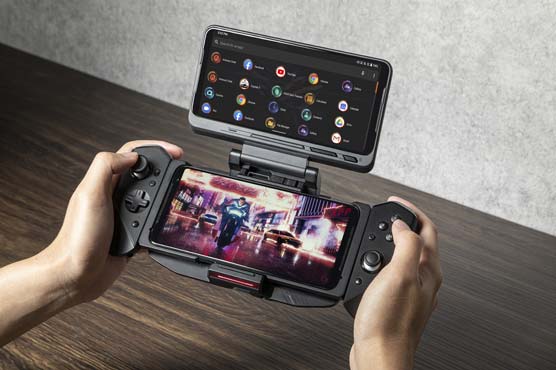 (Web Desk) – ASUS ROG is undoubtedly a market leader in the aspect of mobile gaming. The brand has now taken things a notch higher with the launch of the ASUS ROG Phone 3 at an online ceremony.

The ROG Phone 3 presents with several cutting-edge technology and improvements over its predecessors. With the Snapdragon 865+ mobile platform onboard, 144Hz refresh rate and more, the gaming phone is tailored towards achieving the best gaming experience.

The Asus ROG Phone 3 features a 6.59-inch AMOLED display with a 19.5:9 aspect ratio. The phone sports a Full HD+ resolution of 1080 x 2340 pixels, as well as a refresh rate up to 144 Hz, the highest ever seen on a phone. The display will not be the only light on the phone: on the rear side, there will be a LED-lit ROG logo which lights up during gaming.

As stated earlier, the ROG Phone 3 is powered by the new Snapdragon 865 Plus mobile platform. The processor offers a 10% increase in GPU and CPU speed. It also brings 5G support to the smartphone with a Snapdragon X52 external 5G modem supporting all the 5G spectrum, including mmWave (SA and NSA).

The processor is paired with up to 16GB of LPDDR5 RAM as well as 512GB UFS 3.1 flash storage. There are also 12GB RAM and 8GB RAM variants.

Still, talking of the hardware, the AirTriggers functionalities have been improved from two to five. This springs up the possibility of setting up the entire gaming controls with less incursion into the display, giving gamers an immersive experience. There is a 6000mAh battery under the hood as well as dual stereo speakers.

For photography, the ROG Phone 3 packs a triple camera setup on the back including a 64MP Sony IMX686 main camera with f1.8 aperture and 1.6um large pixel size. There is also a 13MP ultrawide sensor and macro camera. For selfies, the notch-less display houses a 24MP sensor.

The ROG Phone 3 runs Android 10 out of the box, customized by the ROG UI.