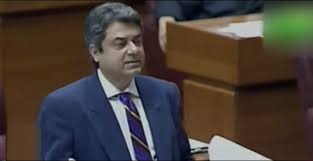 ISLAMABAD (City News) – Federal Minister for Law Farogh Naseem on Friday has said that Indian spy and agent of intelligence agency Research and Analysis Wing (RAW) Kulbhushan Jadhav has not been pardoned for his involvement in terrorist activities in Pakistan.

Addressing the National Assembly (NA) session, the minister suggested to not do politics on sensitive security related matters. The sentence of Indian spy has not been overturned, he added.

Farogh Naseem said that the ordinance regarding appeal of Kulbhushan Jadhav was presented as per the verdict of International Court of Justice (ICJ).

Pakistan will try to fulfill its international duties, he pledged.

The reaction came day after a rumpus erupted in NA session when law ministry tabled ordinance regarding appeal of Kulbhushan Jadhav under Article 89 of the Constitution.

The government even handed over Indian pilot Abhinandan to his country after offering him a cup of tea, he alleged.