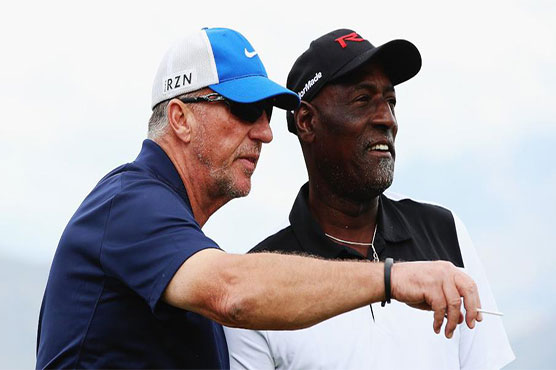 LONDON (AFP) – Almost half a century on from when cricket legends Ian Botham and Viv Richards made their county debut for Somerset their bond is as strong as ever, they explained in media interviews on Friday.

England all-rounder Botham, 64, earned the respect and eternal friendship of 68-year-old West Indies batsman Richards for never turning his back on him even when the Englishman received hate mail during the halcyon days at the county.

Their bond has been recognised with the announcement that future Test series between England and the West Indies will be called the Richards-Botham Trophy.

The third and final Test of the present series — which is tied 1-1 — gets underway later on Friday at Old Trafford.

“What I can say to Ian? I can thank him so much for being in my corner,” Richards told Sky Sports.

“We just represented what I think people should be representing: that we re all human beings, and that s the most important thing.”

Botham and Richards in their prime were targeted by South Africa to persuade them to go on rebel tours during the time when sporting links were cut due to the apartheid regime.

Both declined but other England stars like Mike Gatting, John Emburey and Graham Gooch did go whilst the West Indies also toured there.

“The thing that finally finished me with all that was when they turned round to Viv and said: We ll make you an honorary white man. I said: Hang on, where s this going? ” Botham told the Daily Mail in a joint interview.

“He s black and he s proud and magnificent and a great guy.

Richards agreed with Botham over his statement that all lives matter.

The pair stressed that it was not a rejection of the Black Lives Matter movement which was born out of the death of unarmed African-American man George Floyd in Minneapolis at the hands of police officers in May.

“I most certainly agree with Ian when he says all lives matter,” said Richards.

“It s been highlighted now because of the events we ve seen played out in America — this hate towards our colour.

“If we have respect for one another, these things wouldn t come into the equation.

“Look at Covid. We are not in control. This warfare is hitting everyone — not just black or white, but every race and every country on earth. We should all just sit back and reflect on where we d like to be.”