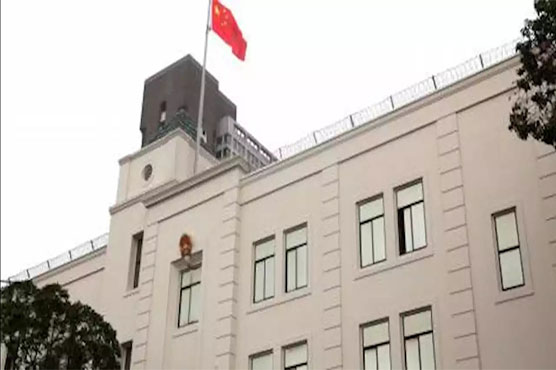 HOUSTON (AFP) – US-China relations deteriorated in a Cold War-style standoff Friday as Beijing ordered a US consulate to shut in retaliation for the closure of its Houston mission — accused of being a hub for espionage and intellectual property theft.

Chinese officials were seen loading large sacks of objects and documents onto U-Haul trucks and tossing more into dumpster bins at the country s large mission in the Texas city, given a Friday deadline to vacate the building.

After the last of Beijing diplomats departed, law enforcement cordoned off the area and US officials were seen entering the consulate after using tools to force open a door.

In the Chinese city of Chengdu, in southwestern Sichuan province, some two dozen police were stationed in front of the US consulate as onlookers took photos before being prodded to move along, with the deadline for the Americans to vacate unclear.

Washington officials said the level of unacceptable efforts to steal US corporate secrets and proprietary medical and scientific research from the Houston mission had grown too large to ignore.

For years, he said, the Chinese Communist Party “has undertaken a whole-of-society effort to steal American technology and intellectual property for commercial gain, and many of these activities are directed from PRC diplomatic facilities.”

Underscoring the point, on Friday the Justice Department announced that a Singaporean “political consultant” based in Washington had pleaded guilty to recruiting American targets for Chinese intelligence.

And it said that a science researcher at a California university who hid her ties to China s People s Liberation Army and then fled to the Chinese consulate in San Francisco had been arrested and would face visa fraud charges.

China blasted the Houston move and blamed Washington for the sharp deterioration in relations.

Closing the Chengdu consulate was a “legitimate and necessary response to the unreasonable measures by the United States”, the foreign ministry said in a statement.

“The current situation in China-US relations is not what China desires to see, and the US is responsible for all this,” it said.

Foreign ministry spokesman Wang Wenbin told reporters that some US staff in the Chengdu consulate, near Tibet, “were engaged in activities outside of their capacity, interfered in China s internal affairs, and endangered China s security and interests.”

The Chengdu consulate, established in 1985, has been at the center of past controversy. It was included on a top-secret map leaked by intelligence analyst Edward Snowden showing US surveillance worldwide.

The Chengdu mission was also where senior Chinese official Wang Lijun fled in 2012 from his powerful boss Bo Xilai, who was then head of the nearby metropolis Chongqing, and has since been jailed for life for corruption.

The deepening spat followed a torrent of speeches by top American officials attacking Beijing, and a series of arrests of Chinese nationals in the United States on spying, intellectual property theft and visa fraud charges.

In a strident policy speech in California Thursday, Secretary of State Mike Pompeo called on “free nations” to triumph over the threat of what he said was a “new tyranny” from China.

“Today, China is increasingly authoritarian at home, and more aggressive in its hostility to freedom everywhere else,” Pompeo said.

He accused Chinese President Xi Jinping of being a “true believer” in the “bankrupt” totalitarian Marxist-Leninist ideology.

The two nations have increasingly tussled over a plethora of issues, including China s handling of the coronavirus pandemic and its efforts to quash a democracy movement in Hong Kong.

In a video call with his German counterpart, Foreign Minister Wang Yi said China still hopes to have mutually respectful cooperation with the US but stands ready to firmly safeguard its national sovereignty and dignity.

“China will not follow the US s dance, but will also never tolerate the US s reckless behavior,” Wang said.

Victor Shih, associate professor of political science at University of California-San Diego, said that closing Chengdu instead of a higher profile US mission indicated Beijing was trying to avoid derailing ties completely.

“This response potentially allows the two sides to take a breather in this escalation, and provides room for the Trump administration to assess whether further straining ties with the US largest trading partner in an economic downturn is advisable,” Shih told AFP.

But Washington officials told reporters in a conference call Friday that US policy had shifted and that they want China to end its broad efforts to steal US intellectual property and stop abusing US openness.

“There comes a time when you have to say, enough is enough,” said a senior State Department official, who insisted on anonymity.

“This is part of a deliberate effort by the US government to put this relationship on solid footing, footing that is balanced, that respects the interests of both sides.”

Weekly report: Dollar depreciates in interbank, gold up by Rs9050