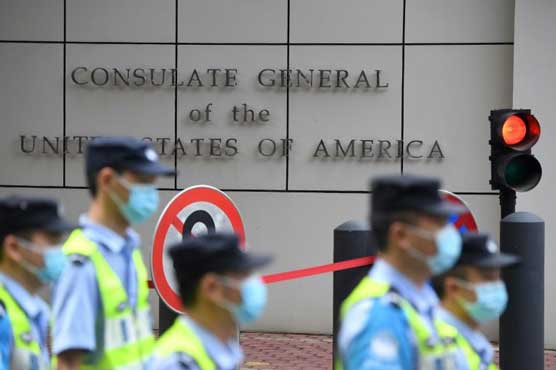 Chinese authorities take over closed US consulate in Chengdu

CHENGDU (AFP) – The American flag was lowered at the US consulate in China’s Chengdu city on Monday and Chinese authorities entered the building, as Beijing carried out a Cold War-style retaliatory closure of the mission.

Earlier in the morning state broadcaster CCTV showed footage of the flag being lowered, after diplomatic tensions soared between the two powers with both alleging the other had endangered national security.

Beijing later confirmed the consulate had closed at 10am (0200 GMT).

“Afterwards, Chinese authorities entered through the front entrance and took it over,” the foreign ministry said in a statement.

Relations have deteriorated in recent weeks in an intensifying standoff, with the Chengdu mission Friday ordered to shut in retaliation for the forced closure of Beijing’s consulate in Houston, Texas.

Both consulates closed 72 hours after the order was made.

Footage from state media showed officials arriving at the consulate in a minibus and walking into the front of the building.

They were followed by several workers in full hazmat suits and goggles, carrying cleaning equipment.

Two men wearing white gloves were shown covering up a US consulate sign on the wall outside the building with a large grey sheet.

The road leading to the Chengdu mission was closed on Monday, with police and cordons blocking the way. State media reported that staff members had left the compound at around 6 am Monday morning.

A crowd gathered outside the now-closed mission, and one man was escorted away by police after waving a banner and two Chinese flags while shouting “Long Live China’s Communist Party”.

The US embassy in Beijing posted a farewell to the Chengdu mission its the Twitter-like Weibo platform on Monday.

“Today, we bid farewell to the US consulate in Chengdu. We will miss you forever,” it read.

Over the weekend, removal trucks entered the site and cleaners were seen carting large black rubbish bags from the consulate.

AFP reporters saw workers removing the US insignia from the front of the building.

The US consulate in the city covered China’s southwest, including Tibet. Many Tibetans accuse the central government of religious repression and eroding their culture.

Beijing says closing the consulate was a “legitimate and necessary response to the unreasonable measures by the United States”, and has alleged that staff at the diplomatic mission endangered China’s security and interests.

Foreign ministry spokesman Wang Wenbin told reporters that some US staff in the Chengdu consulate “were engaged in activities outside of their capacity, interfered in China’s internal affairs, and endangered China’s security and interests”.

Washington officials, meanwhile, said there had been unacceptable efforts by the Chinese consulate in Houston to steal US corporate secrets and proprietary medical and scientific research.

Tensions have soared between the world’s two biggest economic powers on a range of fronts including trade, China’s handling of the novel coronavirus and a tough new security law for Hong Kong, with US officials warning of a “new tyranny” from China.

The last Chinese diplomats left the Houston consulate last Friday, with officials there seen loading large sacks of documents and other items onto trucks, and throwing some in bins.

Beijing said Saturday that US agents “forcibly” entered the Houston consulate, which it said was “China’s national property”.

Its statement warned that “China will make a proper and necessary response in this regard”.

Nationalistic tabloid the Global Times warned in an editorial Monday that if Washington was “determined to push China-US ties in the worst direction… the 21st century will be darker and even more explosive than the Cold War era”.

It said the rising tensions could lead to “unprecedented catastrophe”.