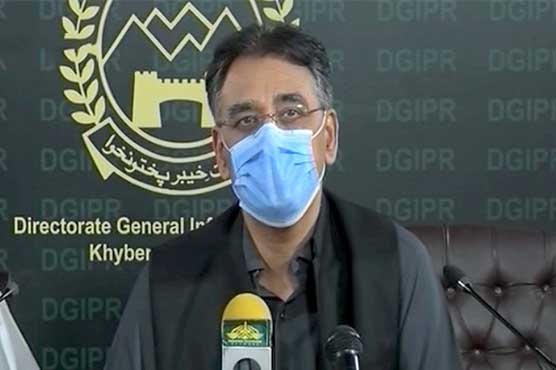 PESHAWAR (City News) – Federal Minister for Planning and Development Asad Umar, while appealing to the public, said that the coronavirus pandemic is still a threat and it should be treated as such. Strict implementation of SOPs and precautionary measures will ensure that Eid-ul-Adha passes without causing a major spike in new cases.

Briefing the media after the NCOC meeting in Peshawar, Asad Umar said that the spread of the virus in Khyber Pakhtunkhwa was on the decline and the provincial government played a vital role in achieving this.

The Federal Minister said that Eid-ul-Adha is an important occasion but it is our responsibility to practice precautions in order to protect ourselves and those around us. He urged the public to celebrate Eid with simplicity and conduct sacrifice in a manner that does not result in spread of the virus.

Chief Minister Khyber Pakhtunkhwa Mehmood Khan said that SOPs have been formulated in public interest to save the lives of the people, they should be followed strictly. He also urged the public to celebrate Eid with simplicity, just as all ministers and members of the KP Assembly will.

CM KP said that after Eid, reopening of tourism industry in the province will be discussed and the PM will be approached in this regard. But, until the virus is controlled, people should avoid crowds.

CM Mehmood Khan said he would like to dedicate this Eid-ul-Adha to the martyrs of the Covid-19 pandemic, who lost their lives because of the deadly disease.

The number of confirmed cases of coronavirus in Pakistan has reached 274,289 with the virus claiming 20 more lives, bringing the death toll to 5,842.