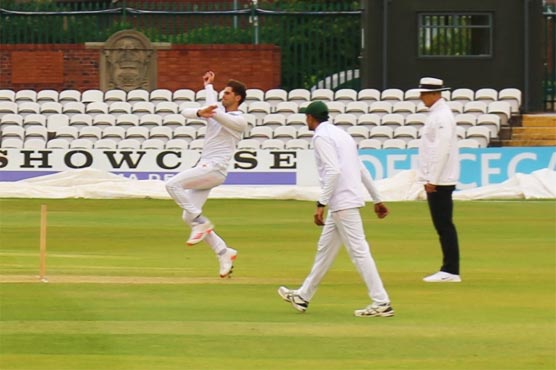 According to an official press release, PCB Greens ended the day at 133 for three in 48 overs, leading by 48 runs with seven second innings wickets remaining.

Shan Masood scored 49 off 73 balls, hitting four fours before his dismissal to Imran Khan. Azhar Ali (28) and Abid Ali (16) were the other batsmen dismissed today.

For PCB Whites, Faheem Ashraf, Imran and Sohail Khan grabbed a wicket each.

Earlier, resuming their first innings on the overnight score of 108 for three in 41 overs, PCB Whites added only 90 runs before being bowled out for 198 in the 79th over taking a 85-run lead.

Fawad Alam top-scored with a 150-ball 43, hitting three fours. Imam ul Haq, who was hit by a ball bowled by Naseem on his left hand on Friday, returned to batting today and scored an unbeaten 41 off 140 balls, laced with four fours.

For PCB Greens, Naseem ended-up with figures of four for 52 runs while Shaheen grabbed three wickets for 47 runs.